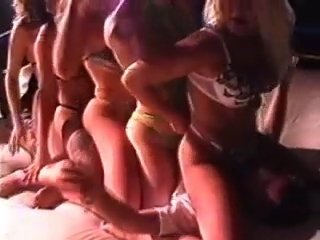 This WTF Sexy Women's Wrestling show is more along the lines of a "foxxy" type show. However, there is some good physical action, but more importantly these chicks are smoking HOT! In fact, even though this isn't a DWOW show so-to-speak, it's a very wild show, with alot of good looking women and action --and alot of these girls would've fit in perfect with our dysfunctional family.

The action is girl on girl for the most part, that is until they do their own version of audience participation where some lucky guys actually get to wrestle the girls one on one. This is good stuff!

This video starts off with rare backstage footage that gets some great shot, with normal lighting, of all the girls participating in this event. Note, this is not a professionally shot event --BUT it still is very entertaining with great actions, and some awesome close ups!

First match is LOLA vs ALEXIS and is billed as two ex-lesbian lovers are settling an argument. Okay, we can go with this premise. At times, the camera felt he would give it an "MTV" feel and rock and film sideways for effect. Initially, it was annoying, BUT we got used to it as he caught some great action, with some "extreme" close-ups if you get my drift.

The sexy and voluptuous blonde takes on the energizer brunette. The blonde is gorgeous wearing a white corset and thong, with lace-up stocking, and is wrestling in her bare feet.

The action is a mix between fun and sexy, mixed with a dash of intergender with a male from the audience. This match includes a lot of straddling, multiple pin falls, and low blow crotch shots.

Next is MARIA vs RAVEN.

The black-haired RAVEN is tattoo heavily on one leg, as she is wearing a black leather studded bikini top and thong, that showcases her incredible ass!

Maria has brown curly hair and is wearing a black top and thong. She has an incredible body.

Watch both girls get oiled up, and watch the guys (their "managers") get hardcore hands on!

This one started out quickly and continued at a fast, and exciting pace, with a WHOLE LOTTA T and A!!! There's lots of action and rolling around.

The show shifted for a minutes as female pro wrestler "ECSTASY" takes out the trash aka an out of shape male independent wrestler. This was, was it was --but it was NO G.I. HO / SOUND GUY confrontation by any means!

Next is an inter gender contest between SYBIL vs BILLY. Sybil has dirty blonde hair and is wearing a one piece, open chest cut (exposing her huge 38 double d's!). This girl has "incredible upper body strength".

Watch Sybil get oiled up, and pay attention for the "nipple slip" and enjoy the face sitting.

The Sassy Redhead, AMELIA NEW YORK takes on a lucky S.O.B. from the crowd.

Dressed in a hot pink top and bottom, Amelia reveals her reinforced bra top that is securing her 36 double d's. She's a sassy ref head, who has a great smile,beautiful face, a great body, and beautiful bare feet.

Amelia will be facing a male fan from the audience. The wrestling in this one is more fun, then competitive. This match also comes with some extreme close ups (of the stuff you really want to see), thanks to the camera man --who seems to be buzzed or lightly drunk at this point.

Can Amelia hit her finisher the "thigh master crunch"? (We didn't write that shit, the MC said it in the video, we just typed it lol)

JANELLE vs HANNAH is the next match.

Janelle is a red head in a neon green one piece-type outfit with a bikini bottom.

Hannah is a little older, feisty brunette, with a great body, and black and silver studded bikini.

2 girls on 1 lucky guy from the staff at the building. These two girls MADE this guys night... who knows maybe his life!

This one is full of rolling around, leg scissors, pile ons, pumping, bumping, and grinding, with some motor boating.

We've lost track now, but this stuff is definitely entertaining!

If we knew about some of these girls back then --they would've DEFINITELY been in DWOW!

Total and utter mayhem, as all control has been lost and all the girls from the back are in the ring.

Boobs! We have bare breasts. Some tall, hot chocolate babe, Coco has lost her top!

Maria joins the action now, 3 girls in the ring.

Meet Billy, the luckiest guy in the room right now, as 6 --yes six girls are all on him, bumping and grinding. Blondes, brunette, redheads.