SKU vod-shamrockbeachessnow-091099
$1.99
In stock
1
Product Details
***FOR A VERY LIMITED WE OFFER YOU THE INSANE SALE PRICE OF THIS INSTANT VIDEO DOWNLOAD AS WE ARE CELEBRATING OUR SOFT GRAND OPENING OF THE NEW DWOWVOD.COM STORE!***

This match is from the debut show for the Dangerous Women of Wrestling which featured the star power of former WWE talent, RYAN SHAMROCK. Ryan was an instant crowd favorite, fresh off her run with Val Venis and Ken Shamrock in the WWE. Never before, and not since has Ryan Shamrock appeared for any other women's wrestling company in the world --except here!

During the match with SANDY BEACHES vs ALISON SNOW aka DANA DODSON the action spilled (literally) out of the ring into the audience with the girls fighting on guys laps throughout the venue.

HEATHER "THE OWNER" came out to restore order, as this match was quickly getting out of control. She then makes the match into a 3 way, and then introduced former WWE star RYAN SHAMROCK. Ryan brought some WWE attitude to the DWOW ring and disposed of both of her opponents, and for some reason thus upsetting Heather the owner even further. 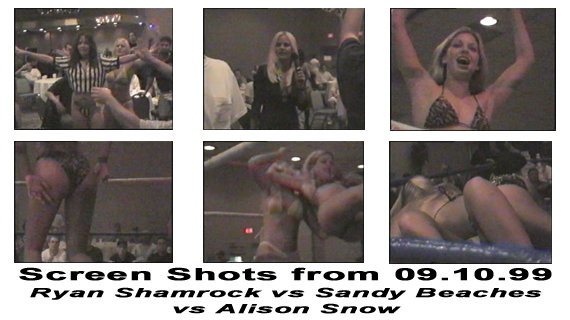