SKU vod-bassshamrock-091099
$9.99
In stock
1
Product Details
***FOR A VERY LIMITED WE OFFER YOU THE INSANE SALE PRICE OF THIS INSTANT VIDEO DOWNLOAD AS WE ARE CELEBRATING OUR SOFT GRAND OPENING OF THE NEW DWOWVOD.COM STORE!***
Here is the first ever MAIN EVENT for The Dangerous Women of Wrestling at their debut show! The company was originally labeled as G.L.O.O.W. - Gorgeous Ladies of Outrageous Wrestling, but changed their name in 2003.

This was an ultimate star power match main event with two former WWE superstars going at it head-to-head first time ever, as the lovely RYAN SHAMROCK takes on the powerhouse and former WWE star and ECW and Howard Stern whack packer in NICOLE BASS! There are some pre-match oddities as Nicole gets oiled down by a guy who was highest bidder to be her manager. During the oiling, she turns on him and pins him. HEATHER THE OWNER strips down to her Victoria Secret's best, as she replaces Ginger as referee in this match. All during the preparations for the match Ryan Shamrock keeps going after Nicole ready to fight! 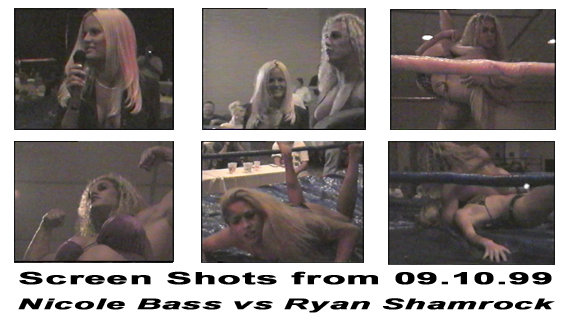