SKU vod-lizcristolmaes-020206
$1.99
In stock
1
Product Details
***FOR A VERY LIMITED WE OFFER YOU THE INSANE SALE PRICE OF THIS INSTANT VIDEO DOWNLOAD AS WE ARE CELEBRATING OUR SOFT GRAND OPENING OF THE NEW DWOWVOD.COM STORE!***

Things are about to get serious as the Dangerous Women of Wrestling reintroduce their tag team titles in a "All U Can Eat Buffet Tag Team Title Match" featuring THE MAES vs CRISTOL & LIZ SAVAGE with their manager HOBERTO.

It has been two years since the Dangerous Women of Wrestling Women's Tag Team Titles have been vacated, last held by the former WWE starts and "Mighty Midgets" KING QUEAZY" and "LITTLE LOUIE".

This is the first contest since, to put the titles up for grabs. The entire Mae Family is expected to be on
hand, including the 500 pound, Jerry Springer star, POPPA MAE --who likes to interfere so his family gets their way.

Under the direction of their newly found partnership, CRISTOL and LIZ SAVAGE tap the services of their flamboyant manager, HOBERTO, in the hopes he can guide them to a win to score the Women's Tag Titles. They all are fairly new to the wrestling business and would like nothing more than to win the tag titles to put their names on the map in Women's Wrestling. 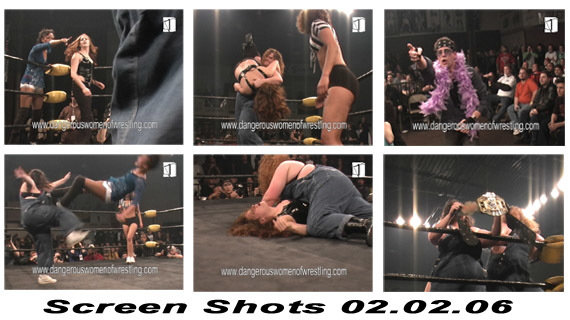