***MUST BE 18 OR OLDER TO DOWNLOAD AND VIEW***ADULT SITUATION. ADULT ORIENTED CONTENT INCLUDING LANGUAGE AND TOPLESS NUDITY***

Download the "Wet Wife Beater Contest" that features two incredibly HOT women in THE GORGEOUS ONE GEORGE and (the new) PUSSY WILLOW (aka BOBCAT).

There are two segments included on this instant video download!

What more can one ask for then when two HOT blondes, with huge breasts enter the ring dressed in skimpy shorts and "Cops" style wife-beaters (made famous on the TV Show Cops) for a "Wet Wife Beater Contest?"

How about if one of these incredible creatures was the ex-girlfriend of the one and only Macho Man Randy Savage? Yes, she was the same girl who appeared in E.C.W. and W.C.W. also! Who also is the same girl who performed totally naked on a webcam in the past and feature dances at the top nude strip bars around the United States? You guessed it correct! We are talking about the one formerly known as, GORGEOUS GEORGE, Due to legal reasons beyond her control, The Dangerous Women of Wrestling renamed her, THE GORGEOUS ONE...GEORGE.

And not to be over shadowed, the "new" PUSSY WILLOW aka BOBCAT appeared in the WWE and captured the hardcore championship, and was one of the "ho's" for the GODFATHER'S entourage. She is also married to former ECW / WWE / TNA star AL SNOW.

The Gorgeous One George is set to compete against her once friend Pussy Willow. Pussy Willow an established wrestler once had a deal with the WWE (as Bobcat) as she was in their development system. She eventually left the WWE for greener --or wetter pastures and ended up in our dysfunctional ring.

We won't give away the ending as a spoiler to what happens after the water is poured on their very wet shirts. Let's say some viewers may enjoy it and some may not?! 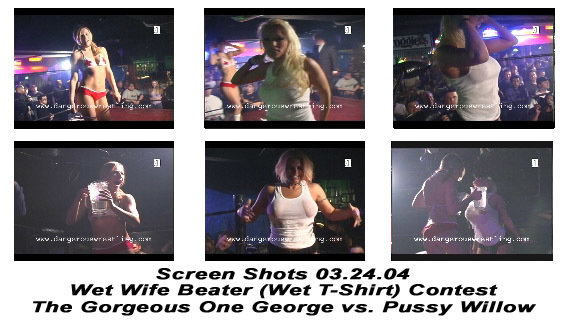 Also included on this download is the "I Hate Ho's Match" scheduled between JENNA TALIA vs THE SOUNDGUY & THE SMOKE.

Originally scheduled as an "I Hate Ho's Tag Match", The Sound Guy made sure BRITTANY "THE OWNER" (aka School Girl) did not show up for this event, thus making the match 2 on 1, in favor of the HO HATERS.

Both The Smoke and Sound Guy took liberties beating on Jenna Talia. Poor Jenna Talia only wanted to be her normal exhibitionist self, and touch herself in front of the packed house. After minutes of the beat down Pussy Willow and The Gorgeous One...George come to the aid of Jenna Talia.