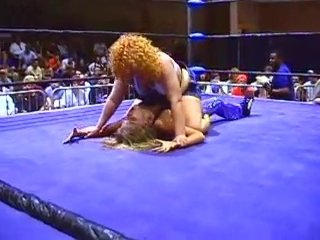 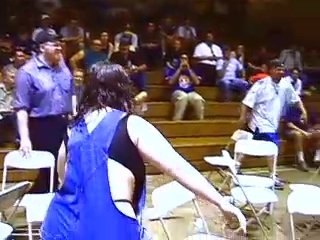 The Mae Sisters make their way to the ring, not to the crowd’s delight. One fan crossed the line with Elle Mae as she (legit) hopped the guard rail pursuing the fan, as Jeanie had to retrieve Elle Mae and refocus her on the tag match she was in with her sister Dawn. 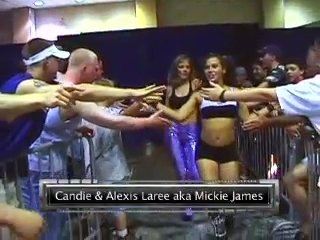 Alexis Laree aka Mickie James and Candie come out to a loud response by the fans. The isle was packed with fans trying to cop a feel on these two beauties. Candie and Alexis embraced the fans ringside with high fives, hugs, and kisses. 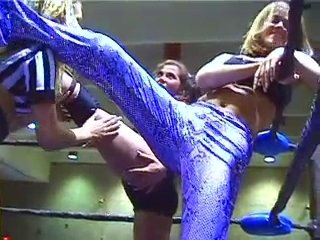 During the traditional sexy pat downs with Alexis and Candie, the crowd erupts with “show your tits” chants. In the opposite corner Jeanie and Elle Mae mocked BJ doing the pat down. BJ found food on Elle Mae, and tossed it into the crowd. 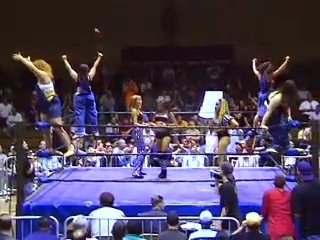 A popularity contest breaks out on the rings corners. Alexis and Candie win every time hands down. All four Mae sister hit each corner as the audience boos loudly. Someone threw something at Elle Mae, and the fans are starting to push her buttons as she is getting frustrated with their “participation”. Elle should realize that if you are gonna spit food and water at --or on people, that people are gonna eventually do it back. Maybe she shouldn’t do that, if she doesn’t want that done to her. 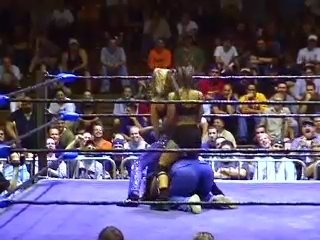 Candie and Elle start things off, as Candie gains the upper hand and rides on Elle Mae’s back to her corner, where Alexis joined the ride as they both rode her like a bull. Alexis takes over, as Elle is winded and looking tired as both Alexis and Candie kick her down, and sends her in for a double elbows. Alexis and Candie are having their way with Elle by cutting the ring in half not letting her grab the tag, as Elle is ridden in the corner with a double bronco buster. 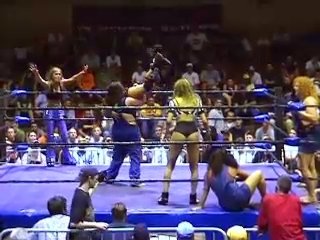 Elle Mae is able to turn the tide, as BJ gets distracted. Jeanie jumps from the top rope to splash Alexis. Incredible camera work catching BJ’s backside. Jeanie works over Alexis on the timekeepers table. The Mae Sisters seem to have gained control, until Elle Mae sends Candie back to make the tag with Alexis, a questionable tactic. 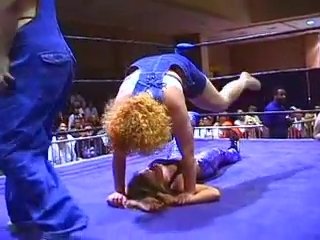 Dawn Mae utilizes some unique offense as she is a very strong and tactical woman in the ring. She uses her size and agility to her credit. Dawn Mae has curly red hair, wears a white sports bar, with wide open side cut in her denim overalls --that showcases her thong among other things, and wrestles in her bare feet. She likes to utilizes submission type maneuvers to wear down her opponents. 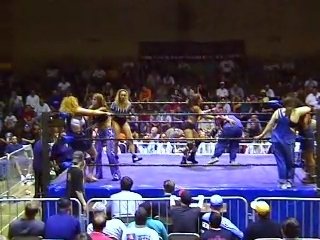 BJ loses control and all four women are in the ring as chaos is taking place. Elle picks up the pin sending Alexis and Candie hurting on their way to the back. Billy Firehawk makes his way into the ring, playing a "Rikishi" type role. Firehawk is a very large man who stands 5 feet-10 inches and weighs in at 350 pounds. He could be of Island descent, with blonde dyed, short curly hair, and he resembles famed WWE star Rikishi --yes the same guy who has the trademark on the stinkface! 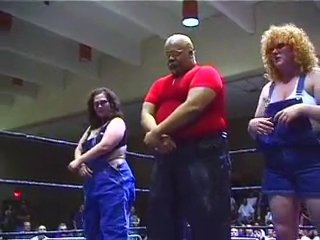 Surprised by Firehawks appearance --and not knowing exactly who he is or was, Elle and Dawn went along with the shtick to dance. Firehawk lined them up in the middle of the ring, sunglasses and all, music started, and he turned on them with a double clothesline to the Mae girls.
Firehawk signals to the crowd he’s going to lay the stinkface on Elle Mae, but she has different plans and turns the table. Billy Firehawk is embarrassed in front of this crowd, to their enjoyment, and is pissed off.