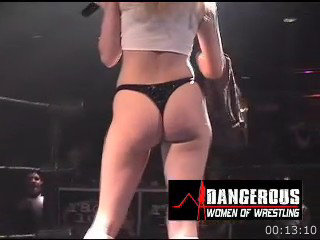 Watch an candid, in depth interview with the DWOW TV show producer as he tells the story about the Dangerous Women of TV Show, with insider info, and great stories about the wrestlers and strippers, as well as the company in general. This video piece also includes actual footage from the television show inserted throughout. If you ever wondered what happened, what went into, or more stories about D.W.O.W. TV it's in here.

The interview portion of this video was shot at DWOW offices/studio in Bensalem, PA. It begins with the producer telling how the whole TV show came about, and a short video clip from the TV show original opening.

The next clip we see is from the DWOW TV show with the announcers ERIC GARGIULO and JEFFREY J. JAMES Handling the call announcing as former WWE Women's Champ and Diva MICKIE JAMES (as ALEXIS LAREE) does a jumping spilt, into nut shot on former ECW star LOU E. DANGEROUSLY.

The producer then goes onto talking about the low production values, and storylines using below pro equipment to make an entertaining TV Show.

The producer goes on talking about the production of the TV show, and how about the low quality TV show actually drew ratings at 1 am on Sunday late night (early am Monday mornings) in the Philadelphia, PA area originally.

We then see a clip from the steel cage match from the Pennsylvania National Guard Armory which started between GI HO and ELLE MAE, but ended up as a free-fall as the entire locker room cleared as this footage features "THE MIDGETS" WET DREAMER & SANDBOY (former WWE stars Lil Louie and King Sleazy), THE SMOKE, SOUNDGUY, LADY STORM, JEANIE MAE, DAISEY MAE, BUNNY BUSH, JADE DEVINE, BOBCAT, and many more.

There is MUCH, MUCH, MORE on this 30 plus minute interview / feature. The producer takes a look at the "War on Ho's" as the HO HATER'S hi-jacked the broadcast, plus match footage of MICKIE JAMES and VELVET SKY. Also included was that one time MR. USA TONY ATLAS teams up with GI HO to take on LADY STORM and THE SMOKE. This is a very entertaining and inside look at The Dangerous Women of Wrestling TV Show.

This video has been commented as also entertaining to even people who don't like wrestling as it has a good story, talked about from the heart from the show's producer. 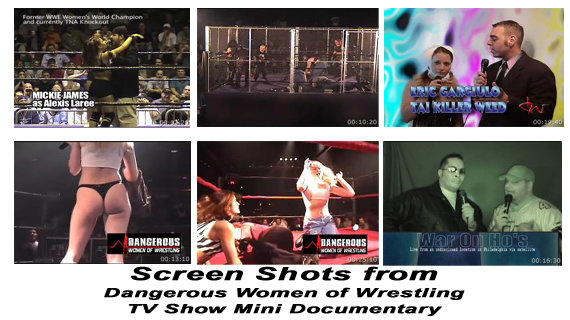 GET EVERY EPISODE OF DANGEROUS WOMEN OF WRESTLING TELEVISION SHOW -SEASON 1 immediately and save money!!!

Purchase and download the COMPLETE SEASON ONE - ALL 13 EPISODES bundled at an incredible price of only $47. Once purchase is completed, instantly download your videos and begin watching. Purchase SEASONS 1 at ONLY .17 CENTS PER MINUTE!!!!!GET ALL 13 EPISODES (--OVER 4 1/2 HOURS) HERE TODAY FOR ONE LOW PRICE!

OR you can STREAM THE VIDEO on our new subscription service for unlimited access for a low monthly payment of $19.99. ORDER now and use the code INTRODUCTORY OFFER upon checkout and receive 50% OFF your subscription membership of only $9.99! Watch all 13 Episodes of Season 1 and more!