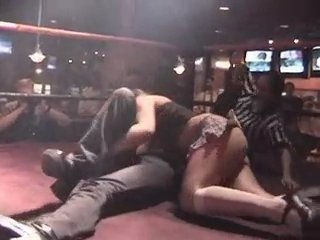 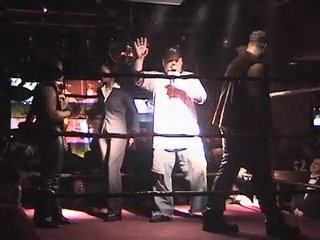 Other music hits which brings out The Sound Guy, Brittany “The Owner”, The Smoke, and Lady Storm. Annie Social smartly exits the ring before a repeat of her earlier beat down. 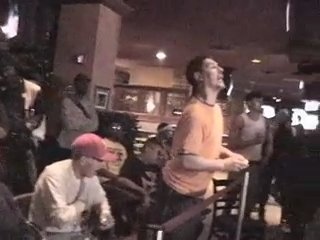 The Sound Guy is hosting court in the ring with a mic as he attacks all in attendance, and they’re giving it back. 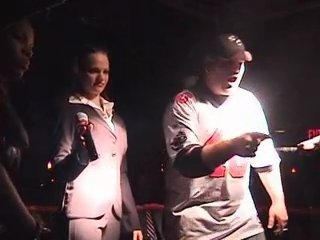 Brittany “The Owner” is about to speak, and the crowd breaks out in a “she’s a ho” chant. 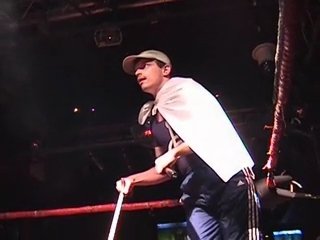 Music plays and out limps Lucky “The Cripple Guy”, all the while Brittany makes an announcement. She says “Pryme Tyme” Amy Lee hurt her ankle and will not be defending the World Title tonight. Lucky is helped into the ring, and is handed a mic. If you’ve never seen a legit handicap in a wrestling ring, living out his dream, you need to see this. As much as you want to like Lucky, there’s something about him that you kinda want to hate in the same instance. He is wearing his full bodyblue leotard suit, with the handicap symbol of a white wheelchair logo is center on his chest, and his white cape. 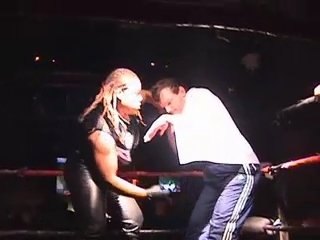 Lady Storm disposed of poor Lucky, who is absolutely helpless to such a beast. 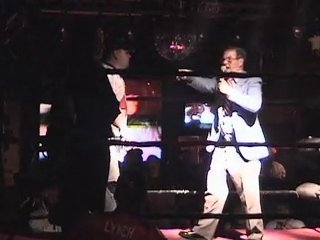 After the massacre, The Sound Guy announces there will be no title match tonight, which the crowd was not happy. Pennsylvania State Athletic commission official (legit), Frank Talent grabs a mic and informs the audience there will be a title match this evening whether the Ho Haters like it or not. 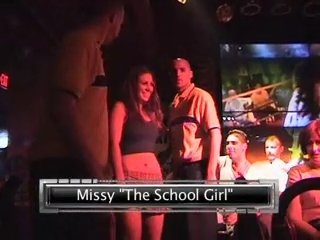 Missy “The Schoolgirl” appears as the “schoolgirl” music plays. The crowd is liking Missy. 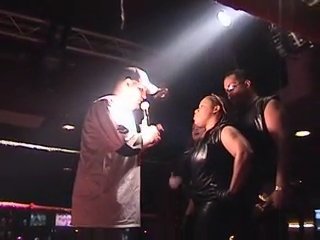 We will now be treated to Missy vs Brittany, as The Sound Guy makes a statement to Lady Storm about not getting the job done. Sound guy was referring to a Kat Man Du event where Lady Storm dumped Missy on her head trying to injure her. Missy was back and ready to fight. 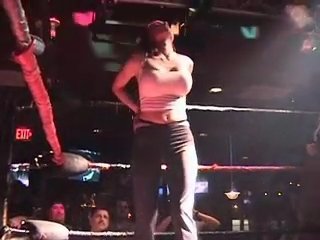 Brittany changes into her “wrestling gear” in the ring. Brittany’s chest is H-U-G-E!!! As much as the audience not liking Brittany running with the Ho Haters, they DEFINITELY like what they see in the ring! 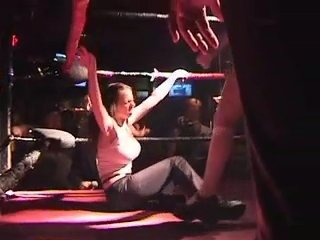 Missy attacks Brittany from behind as she was gathering instructions from the Sound Guy. The Smoke harasses Frank Talent at ringside. Missy has the upper hand and even tries to pin Brittany, but Alere the referee was distracted by The Sound Guy. 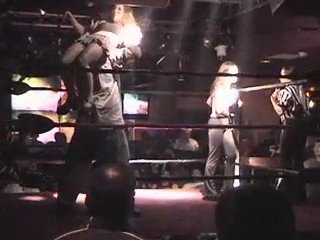 Brittany then distracts the ref, as The Sound Guy attacks, and “soundchecks” Missy, allowing Brittany to capture the win…
Run time: 18:01