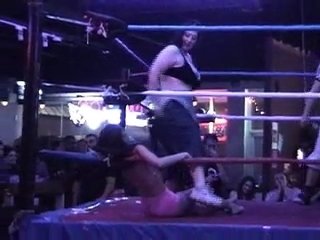 BABYDOLL re-emerges from the curtain to pull double duty, however this time she is done up cute with a plaid mini shirt, white blouse, and wearing her hair up in handlebar pigtails. In the ring when she strips down, it's revealed that she is wearing a hot pink top and bike short set.

ELLE MAE also returns with her patented long panted overalls, and black sports bra top. It seems that the Sound Guy and Elle Mae don't get along, as they argue and push and shove each other.

Babydoll and Elle Mae are both debuted in the middle of the first year of GLOOW / DWOW.

Ring crew scrub and wanna-be indie wrestler Garrett handled the referee duties in this one as Babydoll takes on Elle Mae.

Babydoll starts by jumping on the back, trying to choke Elle Mae. Babydoll tries scooping up Elle Mae for a slam --but that just ain't happening. HOWEVER, Elle Mae easily slams Babydoll. Elle than easily picks up Babydoll and puts her in a torture rack. Elle wastes no time at all and rolls out her ever popular STINKFACE on Babydoll. It wasn't her best one, but hey Elle's ass has fans too!

Babydoll does his a "Baby Buster" on Elle, as the referee pushes Elle Mae. Babydoll goes for a sunset flip, but it doesn't work out, to say nicely. Babydoll hits a top rope baby-factor on Elle Mae.

However, the Sound Guy interrupts the count and DDTs Elle Mae. Babydoll then climbs on top of Steve's shoulders to do a standing splash --but Babydoll couldn't muster the courage to stand up all the way to deliver the full impact to Elle Mae.

After the pin, the Sound Guy turns and clotheslines Babydoll hard. The referee picked up Babydoll and delivered a driver on her to leave her lying.

The Sound Guy then goes to set up Babydoll for a pile driver, however Elle Mae comes to her rescue by hitting the Sound Guy with a steel chair. Both girls rip off the Sound Guy's Devils jersey before leaving the ring. Elle Mae helps Babydoll out of the ring and to the back.