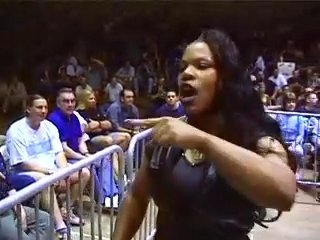 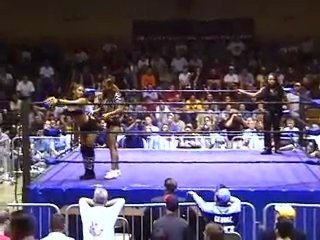 From the moment Alexis Laree came through the curtain she was cute, playful sexy, and full of personality. She is wearing her brown hair up n a very cute handlebar ponytails, with a back and gray sports bra, black biker shorts, with shiny kick pads.

Lady Storm is dressed in a black leather outfit featuring long pants, shirt, and vest. Storm is mean and intimidating, while The Smoke is dressed in a tan and white snakeskin suit, to which the audience doesn’t seem to like as they vocally voiced their displeasure throughout the match. 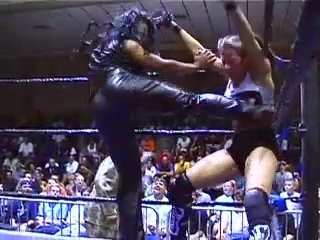 When action starts, Laree is a bit overzealous, while Storm is slow moving, methodical, and uses “unorthodox moves” aka cheats by pulling hair, and low blows. We see some great midsection blows, as Lady Storm used Alexis Laree’s bare, flat stomach as a punching and kicking bag. 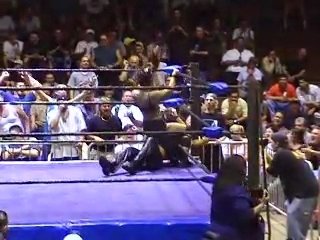 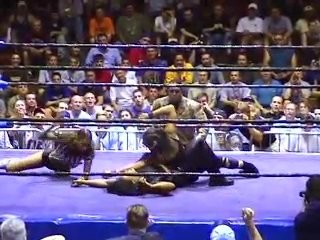 Isis is on top of the action as she gets down to the mat quickly for pin falls, as she is wearing her skimpy ref outfit that showcases off her fit, hot body. 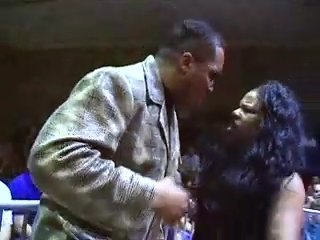 As expected, The Smoke interferes at times during the contest, and even barks orders and advice at Storm to help her gain the upper hand. 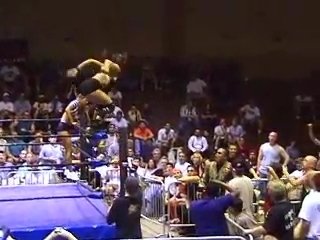 The crowd really gets on Lady Storm and The Smoke, so much so, that they became distracted which allows Alexis to ascend to the top ropes to launch herself like a rocket onto them both. The crowd erupts! Crazy action! Who would think that Alexis Laree would go on to the WWE to win the Women’s World Title, wrestle at Wrestlemania, become Knockout Champion in TNA, and here she is honing her skills in front of a rabid Dangerous Women of Wrestling audience.

Smoke set up Alexis with her crotch-faced crippler with a mis-cue with a chair shot that waffled Storm with it. The crowd was very enthusiastic about this move and backed Alexis Laree for the win.