This match begins with, the busty one, TARA making her way to the ring in long black, skin tight pants, with a black and pink sports bar to hold in her "friends". Tara gets in the ring and starts jaw-jacking with the fans. She then goes to touch the ropes only to find some foreign substance residue on them. She rubs her hands and again touches another section only to find that same substance, which sickens her. Remember, DWOW also hosts oil wrestling matches during the later part of the event, and oil is probably embedded into the ropes tape dressings. Man, who wouldn't want to see Alexis and Tara and BJ in oil!

BJ the referee is looking extremely hot in long black shiny, skin tight pants, that accentuate her bottom, and accompanies this outfit with a sports bra ref shirt, showing off her toned belly.

Announcer extraordinaire, ERIC GARGUILO is handling the in ring announcements. Tara and BJ get into deep conversation; who knows what they could be up to. Tara has been known to cheat and use unsavory tactics during her match.

ALEXIS LAREE aka MICKIE JAMES emerges from the curtain, pleasing the crowd in attendance. Alexis is wearing skin tight, long black pants, a black bra top, showing off her mid-section and a pink bandanna headband, wearing her hair in a ponytail.

BJ then performs the traditional pat down on the girls looking for illegal objects, nothing over-the-top here, unlike when Ginger or Isis do the pat downs (which at times could include groping), which a lot of people like --and prefer!

The match begins as the two lock up and Tara drives Alexis to the corner, breaking the hold on two. The girls lock up again, and Tara is screaming that Alexis is pulling her hair. Tara drives Alexis to the opposite corner, this time not breaking the hold until the four count. Tara continues to bitch to BJ about the hair pulling, as the two lock up again, but this time Tara knees Alexis in the crotch. Tara then grabs the beautiful hair of Alexis sending her backwards to the mat. Tara picks up Alexis by her hair and tosses her a few times around the ring by her hair as Alexis losses her pink bandana. Alexis fires back with a few right hands, sends Tara to the ropes, Alexis ducks the clothesline and now grabs Tara's hair and send her backwards repaying with a few more hair tosses of her own. Alexis drop kicks Tara's back hard, and then quickly goes for the pin to only get a two count.

Alexis takes Tara to the corner and lies in a few elbows to the face. At this exact moment, the thong panty of Alexis is peeking out the rear of her wrestling tights. Alexis whips Tara to the opposite corner, while Tara reverses and runs into Alexis with a clubbing clothesline.

Tara delivers a clubbing elbow to poor Alexis's chest, and then whips her to the corner hard, knocking Alexis to one knee after hitting the turnbuckles. Tara delivers a few more clubbing forearms into the back of Alexis, and then an eye rake in the corner. Tara chokes Alexis with the help of the second rope, thus giving us a nice view of Alexis gasping for air showing off her chest, stomach and rib cage area. Alexis tries to fight back with a few kicks to Tara's stomach, only to be foiled by a quick eye rake by Tara. Tara hits Alexis with a big body slam and then an elbow drop onto her chest.

This match is taking place in the infamous Dangerous Women of Wrestling 12 x 12 ring, so there is no give system like other pro rings, thus making the impact of every move performed much worse.

Tara gets a two count, while Alexis kicks out (and I must add grabbing Tara's breast)! Alexis bails out of the ring to catch her breath, Tara ensues. Tara slams Alexis's head into the ring apron. Alexis catches Tara with a boot to the stomach, and pays Tara back by slamming her head into the ring apron. Alexis gets Tara back in the ring, and sends her to the ropes as she goes for a drop kick, but Tara holds on and Alexis hits the mat hard!

Tara takes advantage of the miss-cue and attacks Alexis with kicks and forearms keeping her down on the mat. Tara goes for the pin for only two. She then backs up Alexis and continues to beat on her in the corner. Tara then whips Alexis to the corner three consecutive times and Tara yells out, "that's it!?" Tara runs to the corner, Alexis pops herself up on the top rope and hits a flip for pin fall!

Alexis celebrates on the ropes and grabs her breast signaling that she is going to rip off of Tara's top. This is a great shot that you almost catch a glimpse of Alexis upper body, as she grabbed her top to reveal her bra which was off her own breasts! Alexis then tries to rip off Tara's top, only to be foiled by Tara's hands to her face, and Tara bails. Alexis follows and runs after Tara, trying to make the fans happy by revealing Tara's breasts! 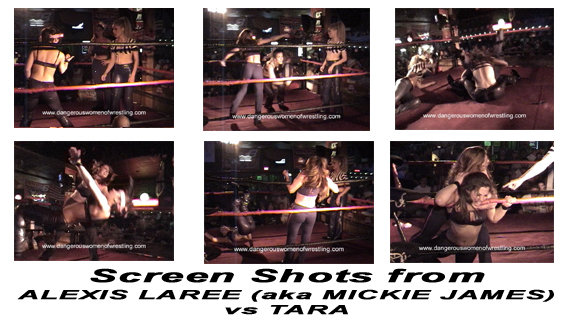