This video starts with the set up to why ALEXIS LAREE aka MICKIE JAMES and TAI "KILLER" WEED are wrestling in the first place. Things start with TARA vs CANDIE at the conclusion of their match, referee'd by the lovely BJ. Candie runs into the corner turnbuckles as Tara goes for the pin, with the help of the ropes, as BJ is out of position. The boos rained in from the crowd, and out comes Alexis Laree to defend Candie to BJ about Tara's legs being on the ropes. Alexis then raises Candie's arm to say she won the match, then turns and clotheslines her hard. The music hits and Tai "Killer" Weed makes her way out from the back.

Tai grabs the mic and calls out Alexis for a match. Tara comes out to back Alexis at ringside. Tai asks the SOUNDGUY to make the match and he does. Tai Weed leaves the ring and chases Alexis around until both wind up back in the ring. Alexis is wearing tight, black spandex shorts and a black and gray sports bar. She is also sporting the "handle bar" pig tail look. Tai's hair is blonde and is wearing her biker chaps, with her bare rear exposed showing her black thong, and she is wearing her black leather, laced bikini top. BJ is wearing shiny, skin tight, long black pants and a cute referee top showing over her mid section.

As Tai and Alexis go to battle, Alexis starts kicking Tai while she is down. Alexis has Tai with a hair mare, into a choke hold, while pulling Tai's hair and driving her knee cap into her back. So far it has been all Alexis, kicks and right hands to Tai's face. Alexis scoops up Tai for a body slam. Alexis whips Tai to the ropes and Alexis goes for a clothesline, but in an act of desperation Tai launches herself for a cross body, as Alexis just pushes her down. Alexis again whips Tai into the ropes and this time lands a nice clothesline on Tai. Tai regains herself as Alexis whips Tai to the ropes, Tai ducks Alexis's clothesline and lands that cross body on Alexis, into a pin fall for a count of two.

Tai begins to mount a comeback landing some right hands on Alexis. She lands a clothesline on Alexis taking her down to the mat. Alexis retreats to the corner and Tai hits her famous monkey flip. Tai scores a two count. Both girls are dazed as Tai grabs Alexis and tosses her. Alexis whips Tai to the corner and Tara scoops out Tai's feet sending her crashing to the mat. Alexis quickly thinks and scoops Tai up for a pin. BJ is out of position and Alexis uses the ropes for leverage to win the match. Alexis runs to the locker room and Tai follows! Candie re-merges from the back and she and Tara go at it on the outside.

Tai rejoins Candie in the ring. Candie then cuts a promo and challenges Tara and Alexis to a tag match, and the match is made. Look for it on download now! 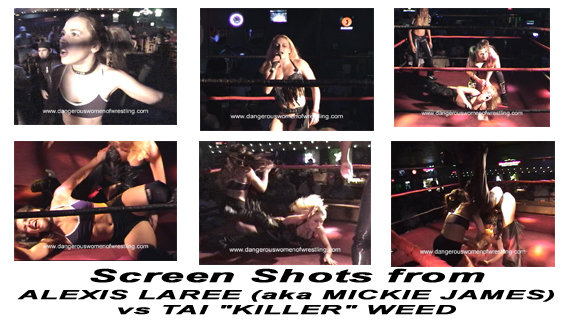