The video starts In the ring is the lovely referee ISIS aka ISABELLA, the exotic Puerto Rican, wearing tight black booty shorts, with her ref thong protruding out the side (as well as her rear from the bottom of her shorts), and her short ref top showing off her nice stomach. Announcer, JEFFREY J. JAMES handles the introductions.

ALEXIS LAREE aka MICKIE JAMES is out first wearing her tight, black spandex shorts, black and gray sports bra, and a black bandana on her hair and sporting the handle-bar pigtails. She comes out cocky, and full of attitude.

Blasting out of the curtain is PSYCHO BYTCH, as Jeffrey J. James leaps from the ring. Psycho runs around the ring area screaming, tugging on the ring posts, a fan favorite for sure. Psycho screams and the fans respond back with their own scream! Psycho is a rather large girl, dressed on in black velvet and wears white face makeup with fake blood. Although I wouldn't piss her off as I'm sure she's no stranger to real blood.

As the bell rings, Alexis calls for Isis to check Psycho. Psycho screams in displeasure, as Isis does an immediate about face. The two go to lock up, and Alexis ducks her opponent and celebrates to the crowd. The crowd starts a chant at Alexis of "where's your breasts?" A true dysfunctional Dangerous Women of Wrestling crowd.

A lock up is about to happen, but Alexis slides under and out of the ring, once again celebrating. Celebrating what, we are not sure of? The crowd is very vocal at this point, while Alexis is stalling.

Alexis back in the ring, goes to lock up with Psycho, but instead lands a boot to Psycho's gut, and wrenches on a headlock. Psycho over powers little Alexis and sends her to the ropes. Alexis tries three consecutive shoulder blocks to take down the big beast, but lands on her back this time. Alexis gets up only to be met with a stiff clothesline by Psycho. Psycho has Alexis in the corner and hits her with an open hand slap. She then sends Alexis cross ring and finishes her with a cartwheel round-off backside splash. Psycho then flips herself forward and snaps the neck of Alexis. This is a very athletic display being put on by the very large Psycho!

Alexis crawls to the corner begging for mercy and grabs Psycho's clothing tossing her into the turnbuckle unexpectedly. Alexis lands a half dozen kicks, knocking Psycho off her feet. While Alexis is jaw jacking with the crowd, she continues kicking down Psycho keeping her off her feet where she could do the msot damage.

Alexis positions Psycho on the second rope and lands her leg around to choke the big girl. Alexis continues to work over Psycho. Alexis places Psycho's head between her legs to tries for a pile driver, but Alexis can not move Psycho as she is five times her size. After trying repeatedly for the pile driver, Psycho launches Alexis over head and onto the mat with a standing back body drop. Alexis tries to regain her offensive only to be taken off her feet with a series of clotheslines. Psycho screams and the crowd screams back!

Psycho sends Alexis to the ropes, Alexis ducks and gets into it vocally with the crowd, as she turns around she is met by Psycho Bitch who puts her and chokes slams Alexis driving her through the mat, which Psycho follows up with a huge standing splash and scores the pin fall. 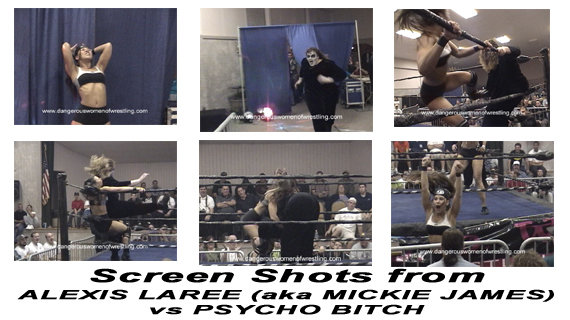