***FOR A VERY LIMITED WE OFFER YOU THE INSANE SALE PRICE OF THIS INSTANT VIDEO DOWNLOAD AS WE ARE CELEBRATING OUR SOFT GRAND OPENING OF THE NEW DWOWVOD.COM STORE!***

This match takes place at a packed bar at 15 North in West Chester, PA and is being taped for Television in front of this crazy, rabid crowd!

Out first is the biker bitch "PRYME TYME" AMY LEE with her manager SPECIAL ED. Ed is not retarded, he's just handicapped. Amy is decked our in her finest Harley Motorcycle gear, as Ed wears his best threads to accompany his prize to the ring. Be prepared to hear some vulgarity at some point during this match up.

Next out is the lovely CANDIE, dressed in tight blue jeans and half top "got candie" shirt, escorting ALEXIS LAREE aka MICKIE JAMES out in those super tight, shiny black long pants, and a psychedelic fluorescent rainbow pattern halter top. Both girls are DEFINITELY crowd favorites! Alexis and Candie take their shot at busting on the handicapped guy and the way he walks (totally not "pc") --even if he does associate with Amy Lee. Amy Lee voiced her displeasure, and then launched a "hocker" at Candie and Alexis standing in the corner. The crowd is REALLY into this! Alexis and Candie lead the crowd in a chant (which we will leave for the video). The busty one TARA will be the ref for this bout, as she is wearing skin tight, shiny long pants and a sports bra ref shirt.

The girls lock up and Amy flings Alexis back to corner easily, and celebrates. The way Amy is celebrating reminds you if she won the World Title... a little too much! Amy begins jaw jacking with the crowd, as it seems they are starting to get to her a bit.

They lock up again, and Amy now sends Alexis hard, backwards to the mat, with celebration of course. Amy locks on a tight headlock, and begins wrenching Alexis head. Alexis does a nice reverse go-behind arm lock on Amy, and then grabs her leg sending her crashing to the mat. Alexis wastes no time and starts to slap Amy in the back of the head humiliating her. Amy then complains to Tara about Alexis pulling her hair. Amy then grabs Tara and pulls her hair. Amy then charges at Alexis, but Alexis is smart and moves out of the way sending Amy to the mat. Alexis then mounts Amy's back and takes her for a ride slapping her ass. Amy retreats to the side of the ring, where her manager rubs her ass. This is not a job many people would like to have!

Alexis starts to wail on Amy with right hands, but Amy counters with a hard punch to the stomach, buckling over Alexis. Amy begins to club Alexis on her back, and then scoops her up for a big body slam. Amy goes for a quick pin and scores a two count. Alexis retreats to the corner where Amy finds her. Alexis delivers a series of kicks to Amy mid section, only to be returned by a series of punches by Amy to Alexis's tight stomach. Amy distracts the referee, while Special Ed chokes Alexis on the ropes. Amy then sends Alexis to the ropes, Alexis ducks and counters with a flying burrito, knocking Amy off her feet once again. Alexis then scores a drop kick, and a pin fall, but Amy grabs the ropes for a break. Alexis again delivers big kicks to Amy's stomach trying to wear her down, but Amy counters with a gut wrenching knee to the stomach of Alexis. Amy shoots Alexis into the ropes, which leads to a double clothesline, sending both competitors to the mat.

Tara the ref gets to the six count, Special Ed enters the ring and delivers a cane shot to Alexis, all the while why Candie is trying to enter the ring. Ed continues to choke Alexis with the cane, as Amy is still down and Tara is blocking Candie from entering the ring. Ed calls out Candie, as Tara is losing control of this match. Candie hits a modified Rock Candy Bottom and drives Ed to the mat. Candie bitch slaps Ed, and Amy comes for the save grabbing Candie by the hair. Alexis comes behind Amy and locks on a full nelson, Candie grabs Ed's cane and launches towards Amy. Amy ducks and hits Alexis knocking her out. Amy goes to grab the pin. Candie tries to make the save by pulling Amy's leg, but Amy weighs too much for the small framed Candie. 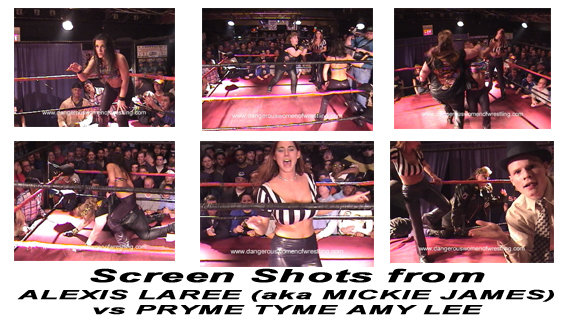