The DANGEROUS WOMEN OF WRESTLING has been known for their inter-gender wrestling matches, and this one will be a good one as ALEXIS LAREE aka MICKIE JAMES takes on LIL DAVEY MAE with BIG POPPA MAE. This video starts off with the exotic one ISIS aka ISABELLA in the ring. Isis is wearing a cute referee outfit bra top with booty shorts, with just enough extra stuff protruding out the backside to satisfy the men (and women too). Her skin is tan and her hair is in a ponytail long, brown and curly, very easy to stare at.

DAVEY MAE with BIG POPPA MAE to the crowds dismay. Both are wearing blue jean overalls with no shirt. Poppa is wearing a straw hat, and is eating a hoagie. Maybe he is on the Subway diet? Both Mae boys are very vocal with the crowd, and the crowd is giving it back. Isis tells Poppa that there is no food in her ring. Davey Mae probably weighs 130lbs tops, while Poppa Mae is tipping the scale at over 500lbs.

Alexis Laree makes her way out to the ring as she is wearing her black hair down and wet. She is wearing a one piece stripper type cat suit that is skin tight where you can see every curve (every). Isis begins to pat down Davey Mae, the whole time complaining. You would think he wouldn't mind a hot girl touching and patting him down, especially since he has trouble scoring with any women. Alexis is patted down next, no illegal objects, or objections, and the match gets started.

Alexis and Davey go to lock up and Davey ducks under and celebrates his accomplishment? They lock up again, and Davey hits an arm bar take down, and again celebrates and is focusing too much talking trash with the crowd on hand, and not worrying about Alexis. You have to love Alexis's outfit as it is so skin tight, as she is not wearing a bra that you can see her nipples popping out on her outfit. Very hot! Davey Mae locks on a headlock, into a reverse arm bar, and finally sweeping Alexis feet from under her sending her crashing to the mat. Davey then leaves the ring to get one on one with a fan jaw jacking each other.

Davey then challenges Alexis to a test of strength, but he can't make up his mind to what hand he wants to do. So Alexis decides to just dropkick his ass. He charges at Alexis as she sweeps his legs out from under him, sending him crashing to the mat. Alexis then mounts Davey and rides him around the ring. Davey bails out to ringside. Poppa is yelling at Davey as Alexis does a running dropkick to Poppa's back sending himself and Davey into the fans in the front row seats. Alexis finds Poppa's sandwich at ringside and shoves it in his face. Poppa was pissed Alexis ruined his sandwich, as she went to torment Poppa Mae over the ropes, he grabbed her head and slingshot her backwards to the mat.

Back in the ring, Davey takes advantage of his situation and lands some punches and kicks to keep Alexis down. Davey then places his boot on her throat and chokes her. Davey continues to pound on Alexis, and gets her in an arm lock, before Alexis can get to the ropes to break the hold. Davey then takes Alexis and places her arm over the tope rope, as he stretches her, before he jumps up and over the tope rope putting a ton of pressure on poor Alexis's arm.

Alexis tries to fight back with a few kicks as Davey counters with his own. Davey sends Alexis to the ropes and wraps her in a sleeper hold on the way back. Eventually she fights back with a few elbows to the stomach and punches to the back. Alexis tries to sprint away, but Davey thinks quickly and grabs her hair and yanks her down hard. Davey climbs to the tope rope expressing that this match is over and tries to hit a leg drop, which Alexis quickly moves from.

Alexis sends Davey to the ropes, as he reverses it, and she ducks the clothesline. Davey hits with her "flying burrito" type move (ala in tribute to legendary "Raging Bull" Manny Fernandez). Alexis sets Davey in the corner and climbs up to deliver 10 hands to the face.

Back to the center of the ring, Davey hits a standing clothesline. He goes for the pin and grabs a two count. Davey calls Poppa up to the ring apron. Davey places Alexis in his arms, and Poppa has a hold on her as Davey runs full force into... Poppa Mae, as Alexis escapes. Alexis quickly kicks Davey in the stomach and hits her reverse ddt for the pin fall. Isis raises her arm for the win, as Poppa chases Davey back to the locker room. 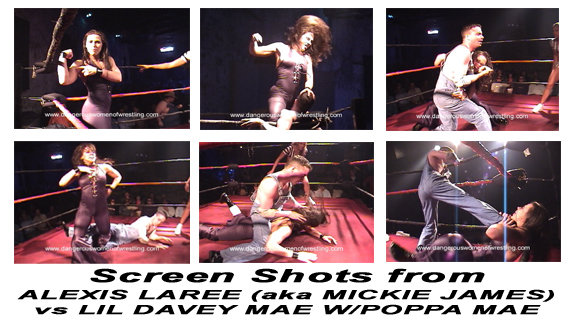