Fresh off his WWE / MTV Tough Enough TV show stint, GREG MATTHEWS makes his DANGEROUS WOMEN OF WRESTLING debut. Greg was determined to get himself booked on the DWOW show being in Williamsport, PA in his hometown --girl show or not! This event takes place inside the Cellblock nightclub, a former prison where actual prisoner hangings took place on a regular basis many years ago.

Greg has a muscular build wearing black shiny wrestling pants. He cuts a promo on how he made it to the big time, but is now back in his hometown... as he says, "the armpit of America" --Williamsport, PA. He then goes on to run down the D.W.O.W. locker room claiming that it is riddled with vernal diseases. He then issues an open challenge.

The music hits and out comes a pissed off ALEXIS LAREE aka MICKIE JAMES who is sticking up for the entire locker room. Alexisis wearing her black hair straight and wet. She is dressed in shiny long, tight black pants, with her psychedelic fluorescent rainbow pattern halter top. Alexis enters the ring and gets in Greg's face, before being mugged and pushed down to the mat, which caught Alexis --and the audience off guard. Alexis retaliated with a low blow, crotch shot, buckling over the towering Matthews. Alexis immediately goes on the offensive with a front leg sweep, then backing Matthews into the corner to deliver right hands. Alexis sends Matthews to the opposite buckles, and leg sweeps him again, sending Greg face first to the mat, this series of moves taking Matthews off guard.

Alexis mounts and begins to ride Greg around the ring. Greg eventually bails out of the ring to recapture his composure.

Greg and Alexis lock up, this time with a plan in hand. Greg takes Alexis down to the mat, and mounts her from behind ala doggy style and pumps away, then smacks Alexis's ass which infuriates Alexis. The crowd loved the action!

The two lock up again, Greg backs Alexis to the corner, and props her up on the top turnbuckle delivering a smack to the face, Alexis responds with a harder, and louder slap of her own. She then jumps over Greg, and delivers a standing dropkick. Alexis backs Greg up into the corner and lays in some bare chest slaps of her own, echoing through the building. Greg sends Alexis to the opposite corner, only to be met by her elbow, a boot to the stomach and finally a hurracana delivering a crowd pleasing sequence of moves. Greg bails out of the ring once more. Alexis ascends to the top rope and launches herself onto Greg on the outside, where she continues to work him over and hits him hard in the back with a steel chair.

Alexis gets the action back into the ring, and whips Greg to the ropes, which he reverses and hits a short arm clothesline hacking Alexis in the mouth. He goes for a pin and grabs a two count. He then picks her up for a body slam, drops a leg on her and goes for a pin, again only grabbing a two count. Greg then goes to whip Alexis to the corner, she reverses, Greg hits the corner and comes out with a back flip (either a botched move, or Alexis threw him sooooo hard into the corner the velocity just over took him). Alexis delivered some boots to the back, then whips him into the ropes, Greg reverses, a botched hip toss, turned into a German suplex, into a pin fall for only a two count. Keep in mind these two are wrestling in the infamous D.W.O.W. 12 x 12 ring and it has NO give. Those bumps and falls hurt for sure!

You can see the frustration mounting on Greg's face, as he takes Alexis to the corner and delivers stiff knees to her mid-section, winding the small Laree. He sets her up and gives her a big body splash in the corner, sending Laree to the mat again. Greg locks on the figure four leg lock. He then just picks up Alexis and tosses her across the ring. He grabs her hair, kicks her in the stomach, then simulates a girl giving a guy oral all the while holding Alexis hair moving her head back and forth. He then sets her up for a pedigree, which looks like Laree wasn't set right and smashed her face on the hard mat. He goes for the win, but no Alexis is alive right before the three count.

Alexis then catches Greg by surprise with a boot to the stomach and hits her reverse ddt looking for the win, but only gets two on Matthews. Greg whips Alexis to the corner as she hits face first; Greg then rolls her up for the pin and uses the ropes for leverage for the win. Greg is showered with boos. Greg grabs a beer ala Stone Cold, while Alexis argues with Isis about him using the ropes. 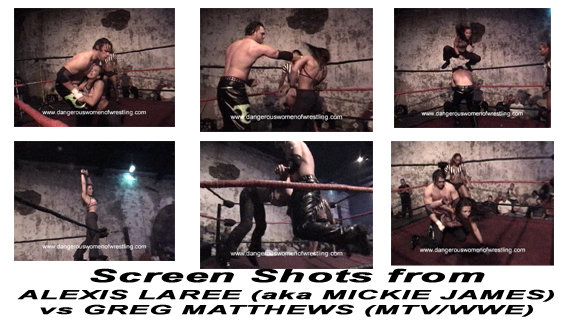