First, we ask anyone watching, or downloading this to be 18 or older, as G.I. Ho is wearing a high cut tank top that at times exposes her breasts. This match was originally billed as a Wet T-Shirt contest between G.I. HO and BRITTANY "THE SCHOOL GIRL"; however Brittany had extra homework to do on this evening, and did not make the event. This event also took place at a corner bar (we kid you not), The Woodshed in Riverside, NJ.

ALEXIS LAREE aka MICKIE JAMES appeared from the back. Wouldn't this be a treat? A Wet T-shirt contest with the one and only Mickie James! Alexis grabs the mic and berates the crowd, stating she would never lower herself to a wet t-shirt contest. Alexis then states how she is about wrestling and not tits and ass.

G.I. Ho grabs the mic and said she (Alexis) may not be about "T N A", but she would be more than happy to give the fans T N A! G.I. Ho then lifts up her shirt to expose her bare breasts, as Alexis Laree attacks her from behind. You really have to love G.I. Ho's top as Alexis is beating her down in the corner, and her twins keep popping out. To re-cap G.I. Ho is wearing full length camouflage pants, and a black tank top cut very high. Alexis is wearing black, tight biker shorts, and her black and gray sports bar.

Alexis works G.I. over with right arms, then whips ho to the ropes, which she ducks and comes back to Alexis with a flying spear, knocking her hard to the mat. The action soon spills out of the ring, with on the spot commentary provided by the SOUND GUY. G.I. Ho and Alexis fight around the bar, throwing each other recklessly on tables and the floor at the bar. Nothing like two hot chicks fighting in the crowd, as you will notice what good shape both are in by looking at their stomach muscles contracting during their struggle. (Also, take notice to former ECW, WWE star JOEY MERCURY watching the match from the crowd. At that time he was dating Mickie James)

G.I. Ho brings the action back into the ring where they continue to battle. G.I. Ho was on top in the corner as she rammed a hard right knee into Alexis's belly. GI whips Alexis to the corner and goes in for the kill, but Alexis counters with an elbow to her head. Alexis thinks quickly and takes out one of G.I. Ho's legs, which takes the her down, knocking her head on the hard mat. Alexis quickly thinking, with BJ the ref out of position goes for the pin, utilizing the ropes for leverage to score the pin. GI Ho got up and was pissed, barking at BJ about the loss. 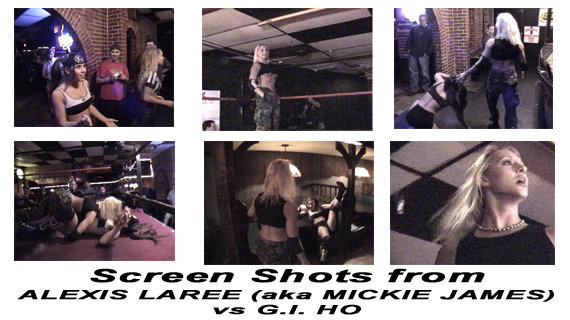