Even though this is the second of three matches featuring ALEXIS LAREE aka MICKIE JAMES vs G.I. HO, many believe this match may have been their best match together.

Alexis is out first. She is wearing her black spandex shorts, a black and gray sports bra top, and is wearing her hair in the handle-bar, dual pigtail style with black bandanna. Alexis looks great and really upset with the crowd, barking at them and throwing them her "number one" fingers.

THE SOUND GUY interrupts the introductions and states they are debuting new talent and the referee for this match is the AMERICAN BOMBSHELL --who shall NOT be confused with the AMERICAN CREAM PIE (ACP) who kisses numerous guys on her way to the ring. The Bombshell was a former fitness and bikini model. She has long brown hair, and is very tan Italian girl with excellent upper body strength (nice breasts) and is wearing a designer white one piece bathing suit, with the sides cut out. Also, note that her ass is pretty much hanging out as well.

G.I. Ho is then announced and received a loud welcome from the crowd as one would guess since Dover, DE is a military town. The blonde haired G.I. Ho makes her way to the ring and is wearing her green camouflage long pants and a short, homemade black cut top, wearing her blonde hair in a single ponytail, with bangs, sporting designer shades, and black weight-lifting gloves. The crowd loves GI Ho, everyone is high fiving, hugging and kissing GI Ho on her way to the ring.

This match is titled Icon vs Icon, as Alexis and GI Ho get ready to do battle. The American Bombshell goes to check Alexis and she is putting up a stink about being touched for the pat down. However, on the other side GI Ho is very much enjoying her pat down, and the Bombshell even pats and smacks GI Ho's ass.

Alexis and Ho go to lock up, Alexis ducks underneath the Ho's grasp and prematurely celebrates. They go to lock up once more, and GI Ho goes for a clothesline which Alexis ducks and slides underneath to the outside of the ring area. GI Ho decides to chase Alexis around the ring, until they are both back inside it. The girls lock up and GI drives Alexis back to the corner, and the Bombshell ask for a break. As Ho breaks, and Bombshell is not looking Alexis makes and acts like GI Ho threw a cheap shot to her own face. During this time we get some nice camera shots of the Bombshell's errect nipples under her suit and some good stomach shots.

The two lock up again and same scenario plays out but on the opposite side of the ring. Alexis bails out saying the ho once again has hit her when she was supposed to break clean. Looks like the Bombshell may have a case of the camel toe as well. GI Ho is getting irritated with Alexis Laree's stall tactics.

G.I. Ho lands a few right hands, and then a clothesline knocking Laree down. Ho whips Alexis to the ropes, but she holds onto the ropes, and escapes the ring. GI Ho chases Laree outside once again, back in the ring Alexis is starting to take control, clubbing the ho and then landing some right hands, and then a hard knee to the ho's gut taking her off her feet winding her. Alexis sends GI to the ropes, the ho ducks the clotheslines and hits a cross body on the way back and into a pin fall for a two count. Alexis retreats to the corner while the ho is bitching at Bombshell as she is inexperienced and was not in position where the ho may have captured the win.

GI Ho goes to attack Alexis in the corner and Alexis makes ho pay with the turnbuckles, and then laying in a few kicks. Alexis hits ho with a hair mare and then stomps on her hair and pulls her arms up, as the ho screams in pain. Alexis hits a beautiful suplex, and then calls for the end of the match, hits the ropes and goes to drop the leg onto ho, but she rolls out and Alexis takes an ass bump. Ho lands a few right hands and two clotheslines on Alexis.

Alexis charges at ho and she takes out her legs, sending Laree to the mat. Ho then grabs Alexis by her hair, mounts her back and rides Alexis like a pony around the ring. Alexis fights back, sending ho out of the ring via the second rope. The two fight outside the ring momentarily. Back in the ring, Alexis shoots Ho to the ropes, ho ducks and answers with a spear and is all over Alexis now. It's now just broken down to a brawl as each of the girls trade fists, and push the referee, as the ref tries to break up the action, she calls for a disqualification, as neither girl is giving as they punch and choke each other. TARA comes out to retrieve Alexis. BRITTANY "THE SCHOOLGIRL" girl pulls GI Ho off Alexis and exposes GI Ho's breasts to the crowd's delight.

Please be 18 or older as top frontal nudity occurs during this match. This match has been edited for the National DVD release of Extremely Dangerous Women of Wrestling V2. Due to it being a National release the sound needed to be re-edited.

This match comes to us from Froggy's in Dover, DE. The special guest ring announcer was Schmidty from a local Dover, DE radio station. 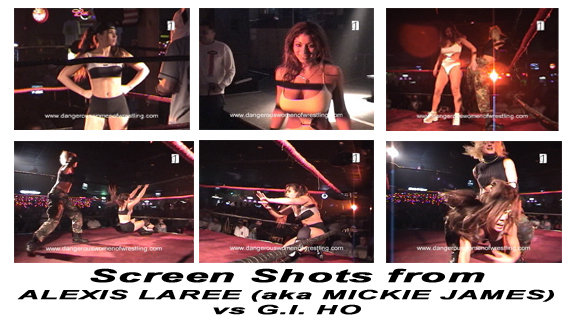