This match is taken from the nightclub AJ's in Levittown, PA and to the best of this writer's knowledge is the actual FIRST meeting between ALEXIS LAREE aka MICKIE JAMES and G.I. HO.

First out is the referee BJ. She is dressed in long black, tight pants, small sports-bra-ish ref bikini top, showing off here stomach. BJ complexion is light brown (which is very exotic looking) with blondish long curly hair, she is very attractive.

Alexis Laree emerges from the curtain, and is rather rude to the fans on the way to the ring. Alexis is wearing her traditional black biker, spandex shorts, and a black and gray sports bra top, with handle-bar, dual pigtail style. Alexis grabs the mic and rails the crowd on hand. Alexis continues to berate the crowd and also starts to pick on crowd favorite G.I. Ho.

G.I. Ho is announced and receives a warm welcome from the crowd. The blonde haired G.I. Ho makes her way to the ring and is wearing her blue camouflage outfit with long pants and a short, homemade cut top. I don't know who cuts her tops, but I wish they would cut all the girls top like that! G.I. Ho's top is cut right below her nipples, as any reaching or extended arm movement will most likely pop out a breast and then some! For some reason the crowd is chanting G.I. Jane to the ho.

GI and Alexis lock up, and the ho locks on an arm bar, and into a side headlock. Alexis maneuvers a reverse, as the ho tries to escape by sending Alexis to the ropes, but Alexis holds onto GI Ho's hair and locks back on the headlock. GI tries to fight her way out with forearms to Alexis's kidneys, and again tries to send Alexis to the ropes, but the ever so smart Alexis holds on to hair once more. Finally, GI is sent to the ropes, but Alexis pulls her hair from the back which sends the ho down hard to the mat. Alexis wastes no time and proceeds to stand on the ho's hair and pull her arms up, as GI Ho screams out in pain. Great camera work here, as the ho's shirt is really tiny! Alexis hits a hair mare on the ho and then rams her knee cap in the ho's back, all the while pulling GI's hair and telling ref BJ she is not pulling her hair, while BJ is issuing a break count.

GI Ho begins to land some right hands on Alexis, and is starting to show some life. GI to the ropes, ducks an Alexis clothesline, and comes back to hit Alexis with a flying cross body, sending the girls to the mat, as GI Ho scores a two count. GI again tries for a pin fall, only to get two once again. There is some great suggestive camera work here. Alexis rakes the eyes of the ho and then starts to lay in a series of boots to GI's body. Alexis sends GI Ho to the ropes, and scoops her up, hitting a hard sideways slam, exposing GI Ho. Alexis goes for a cocky cover and just puts her boot on the ho's tummy for a two count. Alexis continues the boots to GI's stomach and then goes to drop a leg on GI, only the ho moves and Alexis takes on hard on her butt. GI scores a two count, then hip tosses and goes for another two count. Alexis whips GI to the ropes and charges after her, but GI locks her arms in the ropes, and sends Alexis through the second rope to the floor.

The girls take their battle to the outside and fight through the crowd, as they exchange blows and chest chops. Alexis Laree climbs up on the pool table and the ho follows. The two girls are now standing on the pool table going blow for blow against each other. Alexis gains the upper hand, but BJ has just called this match a disqualification. Alexis smashes GI Ho's head into the pool table and is now choking her, as GI Ho is gasping for air, all the while you can see GI Ho's breasts giggling. GI smashes Alexis's head into a table and they continue to fight back to the dressing room. 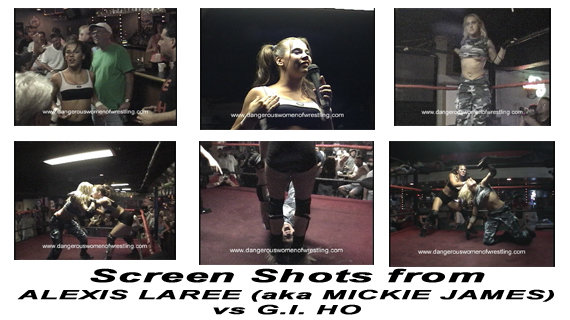