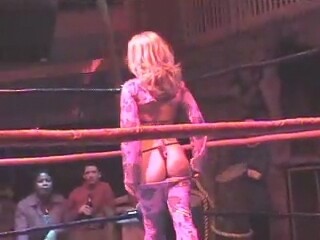 We apologize now as it has taken GLOOW / DWOW this long to do a (BEST OF) TAI OIL WRESTLING. You won't be disappointed. TAI takes on some challengers sure to get you stiff --from all that rolling around. TAI takes on BUNNY BUSH, AMBER AKA GI HO, DEANNA CAINE, BABYDOLL, BRITTNEY "THE SCHOOLGIRL", and much more on this very entertaining BEST OF...

-TAI vs GI HO vs ?? (OIL WRESTLING) Brownies By The Bay Somerspoint, NJ

Production: This show was shot with one camera. Wrestling & Oil matches were shot sometimes from the stage, and others roaming at ringside. There's no play by play announcer, other than MC at event. Videos have been edited to make viewing a bit more pleasurable.

Full Disclosure: Our videos on dwowvod.com are not for everyone. This video is not for pro wrestling purest, however they are entertaining, and at times jaw dropping as you may never believe who started out in the early ring career with us. The camera work can be very erratic and shaky at times. We have edited the videos to clean up the camera work (or lack of) with fades and transitions. We did our best to ensure the raw feel of these scenes for viewing. The lighting is low at times, as we work with in our editing system to brighten up the picture, and applied a colorizing plugin to help enhance the video picture. The audio has been tweaked a bit as well. Please watch the video trailer to get a better idea of what the full show video will look like upon downloading. We hope you enjoy viewing as we did creating and editing each show.