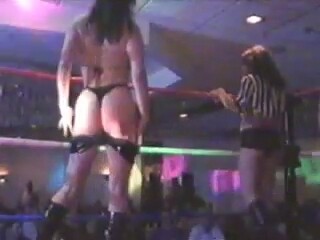 -Shot of official poster board used in promoting event

-Show open Psycho Circus with introduction of the girls:

-Girls mingled and tipped from crowd

-Angel introduction and entrance, escorted to the ring by former

-Auctions for oil wrestling managers, girls dance for their managers

-Devon gets into it verbally with crowd at ringside, before challenging Mimi

-Mimi and referee Ginger get into a catfight

-Heather "The Owner" interrupts with ringside promo. Heather lays the challenge to Dana Dodson, saying if she wins, that Heather will step in the ring to face her, and IF Dana wins she can strip off Heather's clothing!

***Seems to be a switch in camera guys, or camera guy did cocaine, or some other drug, as the camera work becomes more erratic, and starts and stops recording.

-Sandy Beaches & Dana Dodson get manager auctions, and then give dances

*crotch cam in FULL EFFECT during this match!

-Heather calls for security, as Dana actively tries to rip off Heather's top and there IS nipple slippage if you watch closely enough

Production: Show was shot with one camera. Wrestling matches are shot with one "roaming" camera. There is no play by play announcer, other than coming from MC at each event. Videos have been edited trying to make viewing a bit more pleasurable.

Full Disclosure: This video is not for everyone. This video is not for pro wrestling purest. The camera work can be very erratic and shaky at times. We have edited and tried to clean up the camera work with fades and transitions. We did our best to ensure the raw feel of these scenes for viewing. The lighting is low at times, as we've tried to brighten up the picture, as well as use a colorizing plugin to help enhance the video. The audio has been tweaked a bit as well. Enjoy. Please watch the video trailer to get a better idea of what the full show video will look like upon downloading.