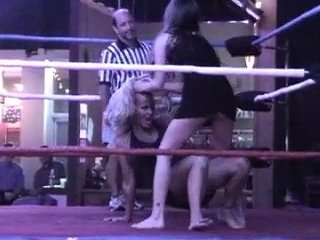 SEXXY VOODOO opens with STEVE "THE SOUND GUY" antagonizing the crowd in attendance about the Philadelphia Flyers and how they suck compared to the New Jersey Devils, the jersey he just happens to be wearing. The Sound Guy continues to ramble on --probably stalling for the girls who run late... as usual.

We are leaving a lot of this video intact to preserve the history of this GLOOW / DWOW event from the year 2000.

The cameraman starts to survey the room, shooting random people in attendance --there's some hot chicks here, and he even does some tight zooms on their privatest of parts. The voyeur cam is in full effect. We even get to see a glimpse of the famous sexy shot girl KATIE!

The Sound Guy goes on to mock a promo by former talent Devon, who departed from the company after the first year. If you know, you know...

Video cuts two two strippers from Daydreams who are here to debut and try out for the company. Both sticking their tongues out, and hamming it for the camera, the one pulls out her boob and flashes the camera! Titty! She's hired!

First out for "match 1" is BABYDOLL. Babydoll is a cute, girl-next-door type with brown long, straight hair and is wearing a black mini dress.

HEATHER "THE OWNER" is out next to the ring. Heather is a hot blonde, who has a deep dark tan, nice body, and is also wearing a black mini dress. Heather DEFINITELY fills out the mini skirt best of the two.

"Warren" the referee is patting the girls down, and checking the ropes. Where did they find this schlub at?

Both girls removed their high heels, and both are "wrestling" in their bare feet.

As the action starts there's some hair pulling, and low blows. Taking into consideration both of these women are fairly new to pro wrestling, and are doing the best they can. Heather is really trying to rip off of Babydoll's dress.

Babydoll escapes the heat in the ring, and decides to make a run for it around the venue. Heather chases her. Heather does catch Babydoll as they fight in, and on the crowd.

Back in the ring, Babydoll bitch slaps Heather a few times in the face, and is able to hit her finisher the "baby factor" and pins Heather. However, it's an evening gown match and once back in the ring, Heather rips off Babydoll's mini skirt. Heather wins! Heather continues to try and strip down Babydoll as Heather is trying to unclasp her opponents bra.

AMBER aka JAILBAIT aka soon-to-be G.I. HO makes her way to the ring for her match. This young, hot blonde, with the perkiest of breasts steps out of her black mini skirt, down to her black thong and bra top. She begins grinding on the turnbuckles. This show has cranked up some since this video started.

The camera finds Katie "The Shot Girl" giving a shot to a fan. Well, it looks more like he's getting a BJ. You be the judge. This red headed vixen, with huge fake boobs, swollen lips, with a great set of legs is wearing a short purple mini-skirt, with a white thong that is exposed when she bends down or over. F'n hot!

Out next is Amber's opponent, ELLE MAE. Believe it or not, this may be the official first meeting and start of the GI HO / ELLE MAE feud. We are telling you there is some historic value to this footage, the people who appear on it, and the events that happened. If only the people in attendance knew what they were watching and was developing on this night. Great memories.

In the ring, the referee from the crowd is patting down both girls. However, GI Ho is enjoying rubbing this man's bald dome. And she's loving it!

After the match is over we find Katie in the ring. Deanna Caine's music hits and I have a feeling this is going to be more sexual than what we saw earlier with Heather "The Owner".

As soon as Deanna Caine is in the ring it's on. Katie and Deanna start making out wildly. Holy shit! There's some dancing, fondling, and more kissing. Katie's shot girl friend is not happy with what just happened here. However, we are!

Babydoll re-emerges from the curtain to pull double duty, however this time she is done up cute with a plaid mini shirt, white blouse, and wearing her hair up in handlebar pigtails. In the ring when she strips down, it's revealed that she is wearing a hot pink top and bike short set.

Elle Mae also returns with her patented long panted overalls, and black sports bra top. It seems that the Sound Guy and Elle Mae don't get along, as they argue and push and shove each other.

Babydoll and Elle Mae are both debuted in the middle of the first year of GLOOW / DWOW.

Ring crew scrub and wanna-be indie wrestler Garrett handled the referee duties in this one as Babydoll takes on Elle Mae.

Babydoll starts by jumping on the back, trying to choke Elle Mae. Babydoll tries scooping up Elle Mae for a slam --but that just ain't happening. HOWEVER, Elle Mae easily slams Babydoll. Elle than easily picks up Babydoll and puts her in a torture rack. Elle wastes no time at all and rolls out her ever popular STINKFACE on Babydoll. It wasn't her best one, but hey Elle's ass has fans too!

Babydoll does his a "Baby Buster" on Elle, as the referee pushes Elle Mae. Babydoll goes for a sunset flip, but it doesn't work out, to say nicely. Babydoll hits a top rope baby-factor on Elle Mae.

However, the Sound Guy interrupts the count and DDTs Elle Mae. Babydoll then climbs on top of Steve's shoulders to do a standing splash --but Babydoll couldn't muster the courage to stand up all the way to deliver the full impact to Elle Mae.

After the pin, the Sound Guy turns and clotheslines Babydoll hard. The referee picked up Babydoll and delivered a driver on her to leave her lying.

The Sound Guy then goes to set up Babydoll for a pile driver, however Elle Mae comes to her rescue by hitting the Sound Guy with a steel chair. Both girls rip off the Sound Guy's Devils jersey before leaving the ring. Elle Mae helps Babydoll out of the ring and to the back.

The ring is set up for OIL WRESTLING as the slacking ring crew prepared the blue tarp to protect the pro wrestling canvas.

MEGAN & KITTY, two naked strippers from the all nude strip club Daydreams made their debut and try out. Both girls dressed like hillbilly, white trash wearing blue denim overalls, and flag printed trucker hats. Think dike-type look. Opposite of hot, unless you like chicks who look like dudes.

Megan had the mic and tried hard to get the crowd on her side --but she didn't have a good mic voice. In fact her voice was piercing annoying.

G-NOTE aka "Expensive G" makes her way from the back to the ring. G is about 6'2 in heels. She is a tanned, athletic, hottie. This girl is not only hot, but strong, with a bad attitude. She is wearing a very short hot pink stripper mini skirt and bra top. She has legs that go on for miles!

G-Note is a no nonsense type of girl. She likes to party, and she LOVES to argue and fight --men or women. Megan and G exchange words that escalate quickly. Kitty steps in front of G blocking her from making a physical advance on Megan. This shit is starting to sound and look real. Something seems off and tempers are escalating --well G-Note anyway lol

G-Note is done with all the lip smacking, shit talking, and calls out for a "real opponent" to wrestle, because that's why she's there.

Out comes AMBER aka GI Ho... Amber starts to dance and get ready for manager auction...

BUT Megan and Kitty have different plans and start to harass G-Note and Amber. Something is not right here. Control has been lost. Kitty and Megan try to legit take down G-Note (which is no small task). This has turned into a real confrontation as the Sound Guy is calling for security, and even jumps in the ring to separate the girls before shit is really out of control. Garrett the ring crew guy also hits the ring to break up the action while these girls are seriously trying to get at each other. We have a legit beef here. Megan and Kitty are removed from ringside, and I guess that is the end of their tryout.

Amber is officially introduced, as she is doing her thing entertaining the audience how she does.

During this, the Sound Guy seems to be talking to this hot girl who is in the crowd. He is trying to convince her to oil wrestle.

G-Note is now in the ring, bumping and grinding, as she teases the crowd by unclasping her front hook of her studded bra top, motioning like she is going to flash the crowd.

Someone convinced this hot girl from the crowd to join in and wrestle as she starts taking her jeans off on the stage. This girl is hot. She has black here, with reddish highlights, very toned body, and beautiful face. She strips down to a purple bra and black thong. Can't wait to see this chick oiled up!

G-Note and Amber are getting oiled up for their match, while this girl from the crowd --NIKKI COX is dancing, and enjoying the attention and camera time.

The girls get managers for the oil match. Manager's get grind-ed on. Managers oil up almost naked chicks in the ring for their now 3 way oil match.

The match started as Amber and G-Note went after Nikki. It doesn't look like G like Nikki too much and wants to get rid of her. There's a lot of great physical action here, and more...

Sexxy Voodoo took place at Harbor Lights in Philadelphia, PA back on May 18, 2000.

Production: One camera, no announcer