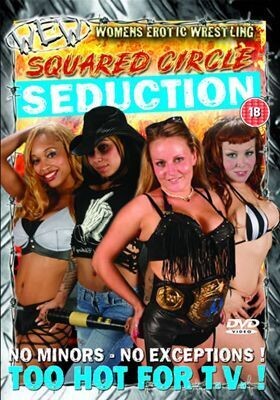 Opening highlight video reel, into announcer ERIC GARGIULO's intro. He goes on to boast about the matches coming in the show, such as hardcore, lumberjack, weapons match, ladders, and much more.

BACKSTAGE. BRIAN MCCARTHY interviews O.D.B. ONE DIRTY BITCH. ODB goes on to talk about her match with PERSEPHONE. McCarthy tries to be funny, but is really not needed as he just gawks at the surgically enhanced, well endowed ODB.

Eric Gargiulo then goes on to talk about WEW's General Manager VALERIE ELIZABETH WINDHAM and her mission to clean up the company of any steroid use, at least for tonight.

ARENA. O.D.B. makes her way to the ring, full of energy. Eric says he thinks she needs to be checked for steroids.

MATCH: ONE DIRTY BROAD vs PERSEPHONE

OUTSIDE ARENA. VALERIE ELIZABETH WINDHAM awaits to be let into the arena, while "The Queen of Extreme" FRANCINE is carrying Ms. WIndham's bag into the building. Tonight only SO CAL VAL will be the GM, and Francine will be her assistant.

PWO AUDITION TAPE REVIEW. Hot girls audition for WEW and the PUSSY WORLD ORDER. This dirty hair beauty is full stacked up top and in the back. Thankfully we get to see what is under her top and bottom too! MUST SEE TV!

BACKSTAGE. "PRYME TYME" AMY LEE holds nothing back as she talks about her match with NAV-A-HO, as Brian McCarthy watching on.

NAV-A-HO talks to Brian about some fat chick Amy Lee. Oooops. This girl has her work cut out for her.

"PRYME TYME" AMY LEE makes her way to the ring with a trashcan full of weapons for her match. BUT, before we get into the action, Amy takes the mic center ring and runs down her opponent.

NAV-A-HO entrance quickly interrupts Amy Lee's stand up set. Nav-a-ho is a cut curly haired brunette. Amy starts to run down Navaho, but the audience is making noise. The bell rings and Navaho starts whooping Amy Lee with a leather belt strap. Navaho uses the belt to choke Lee. Lee then goes to the weapons.

Eric Gargiulo back sells the match, and then talks about the demands that the "diva" CRYSTAL CHARMICHAEL is asking from WEW.

Referee and feature stripper makes her way to the ring as it is announced that we will start with a best body pose down. Alexa starts first. Crystal is second ot posing. The crowd keeps chanting for Bunny. Blind referee Stevie Wonderful has hit the ring. Alexa attacks Carmichael, and the bell rings and the match starts. This match is co-refereed by Bunny and the blind ref.

Post match BABY PHAT and BECKY BAYLESS hit the ring and attack both Alexia and Crystal.

BACKSTAGE. Brian McCarthy is backstage and welcomes Crystal and asks her about the match. Crystal goes on why she lost and what she'll do next time in the building.

Eric is back on camera and talks about the battle for the best ass in WEW. Who will it be? He then intros the next PWO Prospect video!

We are treated to a very sexy dance from a West Coast entry who hails from Las Vegas. This beautiful brunette is definitely a stripper and exotic dancer at heart. She takes off her dress and thong eventually, as she dances and entices the viewers worldwide.

Eric is back on screen and introduces another PWO Prospect videos! More bare boobs and butts, with this video coming from the Everglades. This video package features three naked beauties, posing, rubbing, and other things.

Acting GM ELIZABETH WINDHAM is caught backstage sprawled out on a couch ordering Francine around. She even throws her drink on Francine.

THE SMOKE meets with Brian back stage. He promises that the PWO will get their asses beat down. They start mentioning a person by the name of Mr. Big. Well we know it's NOT STEVE "THE SOUNDGUY".

POST MATCH. Complete chaos takes over the ring as the locker room fights it out in the ring.