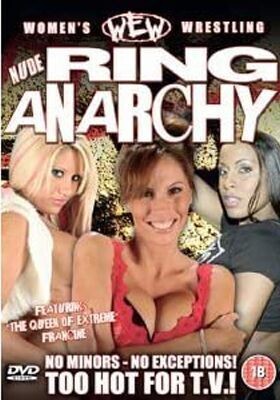 LUCY FURR instructs the car driver to take a very visabilly drunk FRANCINE wherever she wants to go. He replies, yes... he'll drive her right up his ass. An attempt at humor, it wasn't funny. Maybe you'll find it humorous.

WEW Announcer ERIC GARGIULO sets up the matches on the show. It looks to be an action packed show, and of course we look forward to any PWO Prospects videos!

ICES brings her world famous ref dance to the ring. Her dances are incredible. Very entertaining.

"The Queen of Extreme" FRANCINE appears and commands ICES to stop dancing, to the fans dismay. Francine also tells the fans she sick of them too. Francine comes to the ring with vodka bottle in hand, and she looks and sounds drunk.

BACKSTAGE. SERENA STARR & MISS BUNNY both dressed in referee gear are talking. Serena asks Bunny what is she allowed to do in WEW. And all of a sudden Serena has Bunny's top down. The girls start making out very passionately. NURSE T happens to interrupt the make out session. She tells them to stop and get a room. They both start looking for a room to continue their hookup session. They finally find an available room and IT'S ON. Both girls get completely naked and are going to town on one another. GREAT SCENE! Lots of long, deep kissing, among other things.

FRANCINE is back in the ring complaining about WEW and the creative and sexual direction the company is currently in. Francine introduces her "friend" LUCY FURR (formerly Daphne from WCW). Lucy addresses the fans at ringside, before being interrupted by SO CAL VAL aka VALERIE WINDHAM.

This match was supposed to be against the NEW GI HO, but she is currently in jail (legit) and WEW officials couldn't arrange her release in time for the big match.

AMY LEE gets the mic, and asks "Who's your mommy?" Lee goes on to make fun of Sumie Saki, her opponent in this match. We were hoping for an IRON SHEIK promo, but nothing.

Seems SCHOOLGIRL TARA BUSH has converted SUMIE into a Japanese SCHOOL GIRL for this match. The girls waste no times using illegal (well legal for this match) objects, steel chairs, a trash cans, solid wood table, and even a light tube.

BACKSTAGE. Francine, Lucy, interview an extremely large breasted FIVE-HO. This girl has the biggest cans I've ever seen in all of WEW. MUST SEE!

We are then treated to a sexy dance, and striptease from FIVE-HO. This girl gets totally naked showing off all her goods!

BACKSTAGE: TEAM BLONDAGE aka LOLLIPOP and AMBER O'NEAL are sitting on a couch with their TAG TEAM TITLE BELTS while fixing themselves up. The talk about the sluts Talia and April. Lots of sexual comments from both teams.

Eric back on camera talking about the match. He then talks about the upcoming video featuring CLEOPATRA KING.

CLEOPATRA is a light skinned, mixed girl dressed in a full body fish net, with black bra and thong. She loses the bra and thong that exposes her bare breast and lower extremities.

Eric is setting up the HO RUMBLE. All the girls from the back.

BACKSTAGE. Nurse T inspects the prizes for the HO RUMBLE. As she gives each girl the "smell test". This ends with JESSICA BLADE and NURSE T making out. Jessica Blade is thee prize in tonight's HO RUMBLE. She smells and tastes like candy!

Show ends with a music video montage of the action from the event.