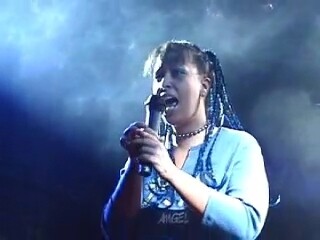 The Gorgeous Ladies of Outrageous Wrestling / Dangerous Women of Wrestling returned to Tuxedo Junction in Danbury, CT starring former WWWF / WWF / WWE Legend MR. USA TONY ATLAS, tagging with "American Hardcore Here-Ho" GI HO as they take on COMMISSIONER SMOKE and his bodyguard, LADY STORM in the MAIN EVENT. This tag match goes out of control once the bell rings, as action spills out of the ring, as we see steel chairs, low blows, wrestling, and much more, as this very rowdy audience holds nothing back.

DAWN MAE, of THE MAES, takes on BAR ROOM BARBIE aka BOBCAT aka former WWE Hardocre Champion and female wrestler CYNDI LYNCH, along with her friend (and drinking buddy) and TNA Knockout BECKY BAYLESS. This one is action packed as DAWN MAE roughs up this sexy blonde. Watch the dreaded SOUNDGUY as he interjects himself. Not to fear, as DAWN MAE delivers the big splash and her patented STINKFACE! The fans love this!

ANGEL is pissed and wants to rid pro wrestling of all pretty blonde girls. She started with TAI WEED last show, now she is turning her sick attention to KRISTI KISS. This match is from GLOOW / DWOW "KAOS ON IVES STREET". You can see the entire match and show here at dwowvod.com Angel has the mic, and she is ready for war. Krisit Kiss doesn't know what she's getting herself into, as Angel wastes no time, and drags Kristi into the ring by her hair and immediately starts punishing her. The action is stiff as can be. Kristi escapes and retreats to the floor, in search for some weapons to use to defend herself from the onslaught of Angel's advances. Angel shows NO MERCY! She is brutal with Kiss, using a crutch, street sign, cooking sheet, and even her own bare hands to choke her. Trash cans, steel chairs, vending machine, mixed drinks, cold beers, and pool tables all play a part in this all out kaos (we know it's spelled chaos)... Witness straight girl vs girl brutality in --and out of a wrestling ring.