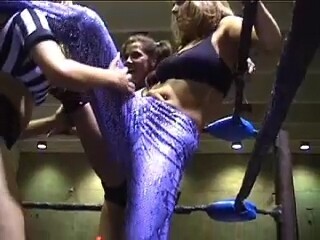 CANDIE thought her debut in GLOOW was just going to be another women's wrestling company --but boy was she happy she was WRONG! CANDIE fit perfectly into the dysfunctional world of the GORGEOUS LADIES OF OUTRAGEOUS WRESTLING, as well as DWOW --the DANGEROUS WOMEN OF WRESTLING!

Enjoy 90 minutes of Candie as she faces tough in-ring competition from TARA, DARLENE, JEANIE & DAWN MAE, plus she even has to deal with the dreaded SOUNDGUY! She also tagged up with WWE DIVA & WOMEN'S WORLD CHAMPION MICKIE JAMES aka ALEXIS LAREE as well. Download her entire compilation now... INSTANTLY... Watch immediately. Own in your personal collection, forever!

Additional Notes: No announcers or commentary, except from the live taping's. Multiple camera angles, and / or edits included when available.