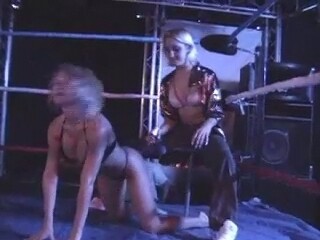 THIS VIDEO IS NOW AVAILABLE FOR INSTANT DOWNLOADING

Please be 18+ and older to view, and purchase this instant video download
"HOT GIRL PROBLEMS"
GLOOW Live from Sportsters in Fairless Hills, PA

This video captures the GLOOW girls at what they do best, and that is to entertain. No matter if a bar is packed, or not, the girls bring their brand of dysfunctional entertainment every time. You can expect some hot girls trying to dominate the weaker and timid girls, while the strippers will be strippers rolling around in oil, wearing their thongs, with their bare asses exposed. You will see some wrestling, some hardcore weapons matches, an intergender (woman vs man) battle, a HUGE STINKFACE, and two hot oil wrestling matches! If you like your wrestling raw, and uncensored --YOU WILL ENJOY THIS SHOW!

Read along for more details about this OUTRAGEOUS live event...

HEATHER "THE OWNER" is looking hot in her black executive mini-dress. Heather is a hot blonde, with a nice tan, and killer body. This is GLOOW's third show at SPORTSTERS. However, this time there is little, to no crowd. Heather calls out THE SOUND GUY to blame someone for not promoting this event properly like the last two times there.

SOUND GUY comes out and claims he didn't book the event, and that he wants to confront ELLE MAE over a recent incident.

ELLE MAE makes her grand entrance, wielding a Singapore cane, that seems to have been recently used on the SOUNDGUY.

SG shields himself from ELLE MAE, by standing behind HEATHER. Heather questions SOUNDGUY'S manhood being afraid of a girl, as ELLE is smiling and holding her cane in swinging position.

BUNNY BUSH sneaks in from behind with a chair, as ELLE is unaware. Bunny "unleashes" a weak chair shot onto ELLE MAE, but it has no effect. Elle no sells the soft chair shot. Elle turns and confronts BUNNY, as the two get into a catfight!

KIT KROTCH (aka GI HO) to the rescue, as she hits the ring and attacks Elle Mae. The girls wrestle / cat fight, until HEATHER "THE OWNER" calls for them to stop, as the SOUND GUY steps in to separate the two combatants.

HEATHER calls the match for ELLE MAE to take on KIT KROTCH (GI HO), with STEVE "THE SOUNDGUY" acting as guest referee.

MATCH: ELLE MAE vs KIT KROTCH (GI HO) w/THE SOUND GUY as referee. There may not be many fans in attendance for this battle, but the ones here at Sportsters are very vocal. Prior to the match starting, Kit Krotch strips down to her wrestling gear. I don't know anyone who would ever get sick of this spot --the pre-match strip tease.

The match starts as KK (Kit Krotch from this point on) drop kicks Elle Mae, who has her backed turned away from her. KK heads but Elle in the crotch area. Elle bails to outside of the ring, as KK follows and the girls are now brawling around the nightclub.

Back in the ring KK kicks Elle in her stomach, and goes for a pin. Bothj girls are near the ropes, as SG makes a very fast count, but Elle kicks out. SG keeps blowing that stupid whistle. Very annoying!

KK goes for the camel clutch on Elle Mae, but Elle uses her brute strength to power out so KK couldn't lock the clutch in. Elle hits a big clothesline, sending KK to the mat hard. Elle goes for pin, but SG blows it off and is taking his good ol time. By the time SG got down to count, KK reversed the pin. SG makes a very fast three count for the win.

ELLE MAE leads an "asshole" chant for the SOUND GUY. Elle instructs SG to not go anywhere, as they have unfinished business. HEATHER "THE OWNER" okays an intergender match between ELLE MAE vs SOUND GUY, and KIT KROTCH will be the special guest referee.

Pre-match ELLE MAE has her Singapore cane, and hits KIT KROTCH (aka GI HO) over the head with it. SG returns to the ring and ambushes ELLE MAE from the rear. SG now is in possession of the cane. Elle Mae bails to the outside of the ring, and locates some weapons to use on the SOUND GUY. We see a cooking sheet being used, as well as a stop sign.

SG chases ELLE MAE around the ring, as he finally catches her with a chair shot to the back. Kit Krotch spits at Elle Mae. SG grabs a steel chain, and chokes Elle Mae with it. SG goes for a spear on Elle Mae, but there is a miscue. Elle canes the Sound Guy. She then hits a DDT on the stop sign, and then gets the 3 count.

Oh it's not over yet! The Sound Guy still gets worked over by Elle Mae, as she whips him into the corner, and hits the big splash, setting up SG for one of ELLE MAES patented STINKFACES!

Post match, the Sound Guy gets into it verbally with the fans at the show.

Next out BABYDOLL makes her entrance to the ring, with introduction. The brunette haired BABYDOLL is a cute, timid girl next door rockin her hair in dual pigtails on the top of her head. She strips out of her mini-dress for her fight.

KRISTEN J. COX, the VP of GLOOW comes out. Kristen is a fiery hot blonde executive. Crisp white dress shirt, black business mini-skirt and jacket. Kristen rails Babydoll, and runs her down degrading and insulting her. Babydoll attacks Cox, by tackling her to the mat, as the two roll around in an impromptu catfight.

During the commotion, BUNNY BUSH hits the ring and goes after BABYDOLL. Now these two are rolling around, pulling each others hair. As the two girls are separated, the VP makes up a match for BUNNY vs BABYDOLL in oil wrestling!

There was a brief intermission, and the ring was tarped for the oil wrestling matches.

Babydoll and Bunny both make their entrances with introductions. Each girl gets someone to oil them up, so they are ready to slip and slide in oil wrestling. BUNNY scores KIT KROTCH to "manage" her, and BABYDOLL gets one of the ring crew guys GRASSHOPPER to manage her.

Production Notes: One camera, with graphics, no announcers besides what's happening in the ring.