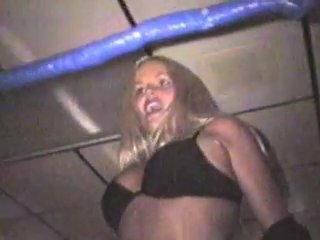 This is the first time that this video has been released digitally, in any format version. Let's take it back to... "the wrestling... the tipping... and the stripping..." as we go back into the archives to resurrect historic Women's Wrestling footage from the GLOOW days (prior to be renamed DWOW). Let's travel back to the Hartley Fire Company in Dover, DE on October 1st, 1999.

Keep in mind, if we know what we do today, this show would been properly lit and shot with multi camera angles, however the true rawness of this recording almost brings you back, like you were apart of the action. We have cleaned the original master up as much as we could, as we have brightened the overall picture images, and rendered a remastered version for your enjoyment. The building is dark, the camera guy is better than the first few show, but moves around a bit --BUT does capture some "key" close up shots we think you will enjoy!

Things get started quickly as we find the very attractive "heavenly" ANGEL in the ring. Angel is a beach blond, with a rich dark tan, wearing a white thong and bra set to which accentuates her look. She is in the ring dancing around, as THE SOUND GUY is auctioning off her manager spot. Someone lucky from the crowd will get in the ring to receive personal one on one attention from Angel, and then will have the honor and duty to make sure that luscious body is oiled up for action. Anyone up for that job???

Next is her opponent DEVON. Devon is a taller and more intimidating adversary. She stands about 6'2 in her high heels, and sports 44 double d's. She has black hair and is of Portuguese decent. Devon needs a manager for oil duties as well.

One thing great about this footage is that the mangers auction, corner entertainment, and oiling was left on video. It's known that when these shows were originally taped, the camera man would stop recording at various times, to "save tape". Don't ask...

The girls need a referee as the Soundguy began the process with auctioning off the job, HEATHER "THE OWNER" appeared from the curtain and put an immediate stop to that. She scolds the audience and then informs everyone that SHE would handle the refereeing for the match.

Heather is a very sexy bleached blonde. She wore a black mini skirt, a black blazer, and a sexy black bra top with heels.When she enters the ring, she begins to remove all of her clothes down to her bra top and black thong. She has a very toned body and nice behind.

Heather gives her sexy pre-match pat downs... in oil wrestling? The crowd is eating it up regardless! We will have 3, one minute rounds. This is no 5 star match. In fact it may not even be a one star --BUT the 3 girls are trying and f'n hot... oh and in oil too!

Action spills outside of the ring... this is oil wrestling yes? Devon chases Angel with a steel chair, only to hit the ring post...

The "re-oiling" of the competitors is again included for your viewing enjoyment.

Back to the action, it seems that Heather "The Owner" is favoring Devon. Devon is able to hit her version of a ddt to finish off Angel.

Post match, Heather taunts Angel. Angel gets back in the ring and we have a BLONDE ON BLOND catfight! Devon helps Heather out and hits some kind of stunner on Angel.

Out to save the day --err night is the beach blonde, beer swiggin', cane swinging bitch SANDY BEACHES, as Devon and Heather bail from the ring.

Heather grabs the mic and instructs the ring crew to remove Sandy Beaches from the ring. The slacking ring crew tried, but to no avail.

The camera next surveys the audience to find the girls working hard, talking to the guys, getting tips, and dancing. Again, the camera work is not the best.. BUT he does get "in there" for some good "shots".

Heather jumps up on the ring apron dancing. She starts to "ride the pole" --the corner ring post that is.

Next match is a TAG TEAM OIL MATCH --between HEATHER & DEVON vs SANDY BEACHES & ANGEL.

Once this match gets started, it's total mayhem --or cluster f... All the blonde girls are incredible to look at however... toned and athletic with dark tans.

It's main event time, and that brings out former ESPN Sports Model and former Playboy Model DANA DODSON. It's sad to report that Dana Dodson passed away in June of 2000. We are honored to have had the privilege of knowing and working with Dana. We treasure the video footage of such a great person and entertainer to be apart of our video library history of the GLOOW / DWOW archives forever.

The tipping and stripping continues.

This video may be dark and grainy at times, but it really does capture the moment and feeling at times.

Dana is energetic and very full of energy. She is like a rocket shot out of a cannon. Her smile and beauty beams through this dimly lit venue. She loves to dance and entertain.

Next, was the historic debut of former American Gladiator SHANNON "DALLAS" HALL. Dallas we coming direct from the airport and running behind because of her delayed flight. She literally got out of the car and headed right to the ring. Shannon is a thin, attractive blonde, with attitude. She grabs the mic and shit gets "real", as she begins to rundown and call out the stripper, Dana Dodson.

SHANNON "DALLAS" HALL is a legit badass! She began her combat career as an American Gladiator back in 1995. In 1998, she wont IFBA Platinum Heavyweight Boxing Championship. In 1999, she was signed by the World Wrestling Federation / WWE. Shannon trained alongside with other future WWF Divas, however she never made it to TV. Hall was eventually released alongside NICOLE BASS and ALICIA WEBB aka RYAN SHAMROCK on July 19, 1999... ALL OF WHO ENDED UP IN GLOOW / DWOW!!!

The Soundguy steps in so Dana can have a manager, as she didn't want to deprive the audience and one lucky guy. The entire time Shannon "Dallas" Hall is just eyeing up Dana, and giving her nasty looks. All the while, Dallas is in a split perched on the ropes. Shannon is also caught limbering up during the entire manager process for Dana.

Shannon starts talking on the mic calling Dana pathetic. Dodson slaps Dallas hard. Dallas was infuriated, turned around and scooped up Dana clean, delivering a back breaker. Hall is strong! Dana did her best to fight back. Dallas goes to choke out (legit) Dana Dodson. THIS MATCH IS MOVING FAST & FURIOUS! This match is NOTHING like the others! This one has pure action and is very intense.

The ring crew of slackers, Lauren & Garrett, hit the ring to try and make Dallas release the choke, which she did do. However, Garrett received a spear from hell, and Lauren had his head taken off with a decapitating clothesline. THIS PLACE IS GOING NUTS!

Dana tries her own spear on Shannon, but didn't get all of it. The match stopped abruptly as Shannon's nose is bloody. Did she break her nose? She is holding her face. Shannon previously broke her nose in combat fighting. She may have re-injured herself.

Shannon grabs the mic and starts to go at Dana. Dana leaves the ring pissed because Shannon stopped the fight.

Dana grabs another mic, and two continue a heated exchange. EVERYONE in this building is on their feet.

Shannon leaves the ring holding her nose. The cameraman follows her backstage, and finds Hall pacing in the hallway still holding her face.

A rematch is set for the next event which is 10/2/99 at The Nur Shrine Temple.

Production: One camera, no announcer