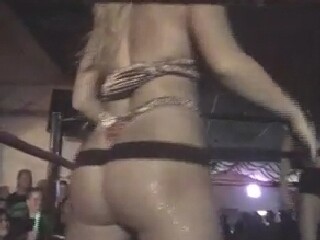 FOR THE FIRST TIME EVER!

Digging into the storage bins, new found master tapes have been found, digitized, and edited for release! For the first time ever, see the entire live event that includes "pro wrestling" and "oil wrestling". Not only are these "new found" tapes, a different person filming got up close and personal with some great shots of these stunning beauties.

Some of this video was previously released in the first ever Dangerous Women of Wrestling "promo video" in what was titles VERY RARE footage taken from John's Boardwalk Bar & Grill (aka Whiskey Tango) in Northeast Philly. The original prom video was shot,produced, and edited by famed directors and producers of the "Unauthorized Story of ECW" BARBED WIRE CITY, John Philapavage & Kevin Kiernan.

This "new" GLOOW / DWOW release has combined the best of the original promo video + an incredible amount of never seen before video and camera angle.

This action packed show with hot chicks can now be yours by digital download for the FIRST TIME ever!!! Never before has this footage been released to the general public as a vhs, a dvd, nor as a download until NOW!

The only way you could've seen this before is you were at the LIVE event, which most likely you weren't! This download is EXCLUSIVE to this site only and runs 1 HOUR long and 14 minutes long! Compare that to the original produced promo video of 24 minutes!!! Get ready to enjoy a wild show as only GLOOW G.L.O.O.W. GORGEOUS LADIES OF OUTRAGEOUS WRESTLING / DWOW DANGEROUS WOMEN OF WRESTLING can only do!

-SOUNDGUY starts the show off.

-"Catfight" real life cousins GINGER & MIMI start to argue and get into an altercation post match loss, as each girl blames the other for losing. Post catfight, an OIL MATCH is announced with the two (legit - real life) cousins.

-Post match STEVE "THE SOUND GUY" and JEREMY from the RING CREW attack the MAE GIRLS, which ends with not one but TWO STINKFACES by ELLE MAE. First Jeremy receives his Stinkface in the far corner, which is good --but then JEANIE MAE setups up the SOUNDGUY buy tossing him to the corner into a stop sign, followed by ELLE MAE delivering her patented STINKFACE --large, bare, white, in a thong to the SOUND GUY, which the place erupts in support. STINKFACE LOVERS! GET IT!