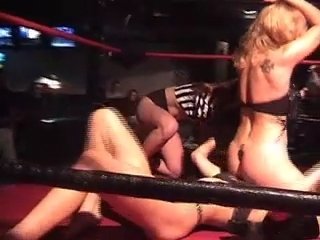 Things get started right away as HEATHER “THE OWNER” enters the ring, with mic in hand. The hot blonde Heather is wearing long, tight black dress pants, and a purple or grayish pullover v-neck, long sleeve shirt with the arms pulled up.

We flash to the girls getting sprayed and rubbed down in oil, as they prepare for their huge match up. We are not going to get into too much detail, except saying get this video and watch this oil up! Especially Brittany The Schoolgirl fans!
The did end up getting that girl from the crowd earlier, into the ring to “manage” Tai. Somehow the “Nebraska” guy is in the ring as referee for this oil match.
Round 1 starts and Tai goes right after Brittany. Brittany squats over Tai’s face and gyrates. Tai reciprocates. Sometimes these girls do things in oil that they shouldn’t probably do for the safety of each other. There’s a whole lotta of sliding, and twisting of almost naked bodies in the ring.
Before starting Round 2, the Sound Guy was barking pinfall instructions to “Nebraska” the referee. The bell rings and we are underway.Tai picks Brittany up and dumps her on the mat twice. Tai then hits a leg drop, and tries to pin Brittany with a humping motion. Just a two count.
Tai picks up Brittany upside down, and begins to twirl her upside down, like a reverse helicopter spin move. This is insane! Tai dumps her after a few spins, and Brittany pops right back up not even dizzy or phazed.
Round 3 starts and Tai goes after the referee, who btw is dressed kind of nice for being at this bar. He is holding onto the ropes for dear life, as he probably doesn’t want to ruin them in oil. Tai jumps up on him and wraps her legs around him for the takedown! Both girls pin “Nebraska”.
Tai then quickly scores a pinfall on Brittany.
AMBER makes her way to the ring in a shiny blue bikini and thong set. Amber comes ready to party as she hops in the ring and starts grinding her hips immediately. She starts to rub herself, as you can see her get more turned on as this goes.
AMY ANGLE returns to face Amber in oil wrestling. Amy is wearing a flag printed one piece mini dress, with a coordinated thong.
Amy Angle made her way around ringside and said hello to everyone. Her and Amber exchanged a few choice words, as Amy walked by.
The Sound Guy antagonized the audience by putting on his New Jersey Devils hockey jersery which brought back the chants of “asshole”.
The Sound Guy is talking to a new girl who is coming into the company. Her name is Princess Prudeness. More to come on her.
Back to Amy Angle’s ass. WOW! You can see some real dislike and jealous between Amy and Amber. This one is going to be a good match.
Amy takes the top of her skirt down to reveal a red, white, and blue bullseye pattern on both of her small, but nice breasts. Amber is grinding away on her manager like no tomorrow. Someone is going to be chaffed come tomorrow.

Now some guy is squirting oil onto Amy. The nozzle is either broke, or unscrewed, but it’s coming out in a stream and not a spray. And he’s shooting in the right spots. Amy Angle is a freak. This company really needs this girl in all the time!
Amy is taking her managers hands and making him touch her EVERYWHERE. Incredible girl here! Amber is cranking up her managers “entertainment experience”, and Amy sees this and is trying to one up here. This oil match is going to be stellar. Sexy hot girls, REALLY going at it!
I am not sure who’s enjoying this more Amy or her manager? Amy is enjoying all this attention. This audience has NO IDEA what they are going to be in for when this oil match starts.
Round 1 starts and Amber comes out like a locomotive and tackles Amy Angle. This is not going to be some fluff match. Get ready for REAL action here. Amber hits one of her SLAMS! Amy is not looking as happy as she once was. It looks like the reality that Amber is strong, and pissed at her (for real) is starting to weigh on Angle.
Bell rings and here we go with ROUND 2! The girls meet in the middle and hug hard, both trying to get the takedown. They both fall to the mat, and a real struggle is happening. Both girls are going at it FULL FORCE. Amber has a slight edge, but you can see the struggle is winding both girls. Amy is a bit more out of breath then is Amber.
Third and final round begins now. Amber jumps up and wraps her legs around Angle, as both girls drop to the mat. Amber picks up Amy and sideway bodyslams her ever so hard. You can see Angle is about to give up. She’s whooped. Amber is NOT going for the cover. THIS IS REAL. Amber is making Amy pay. There’s more to this than some DQ from earlier on. This looks like a scorned girl taking out some revenge on the other woman type shit.
Amy’s not done and she’s got some wind back and on top of Amber. 20 seconds left in round 3. Bell rings. No winner. The Sound Guy asks if they want to go another round? Amber is laying in the middle of the ring and adjusting her bottoms and top. The crowd is cheering. They are chanting “one more round.”
We get a bonus round. Round 4! Overtime! Both girls lock up and are staying close and entangled with each other. Amy Angle is winded. Amber is able to scoop her up for another Amber slam! You have to give Amy credit for hanging in as Amber has pinned her. Amber then hits a leg drop across Amy’s throat. Oh I hope Amy comes back. She could be real great!

It’s time for the OIL RUMBLE! There’s gonna be a ton of action, so you will have to download the video to witness this mayhem!
Amber gets things going drawing #1.
Tai Weed draws #2 and things are off to the races. Amber goes right for her slam.
Someone has dang lost her mind as Elle Mae draws #3 in oil wrestling as the Soundguy says “c’mon fat girl…”
Tai and Amber team up against Elle.
#4 Babydoll enters…
#5 Playboy Bunny Bush enters the oil rumble
#6 Brittany The Schoolgirl
Jeanie Mae and Pussy Willow were also introduced to be included, but neither stepped into the ring, but are at ringside at this point.
#7 Amy Angle returns, refreshed. She immediately sees Amber, but ties up with Elle Mae. Smart girl!
#8 Daisey Mae
Now the eliminations begin… DOWNLOAD THE VIDEO NOW to see it all!
10.06.00 Bellmawr, NJ (Pennant East)