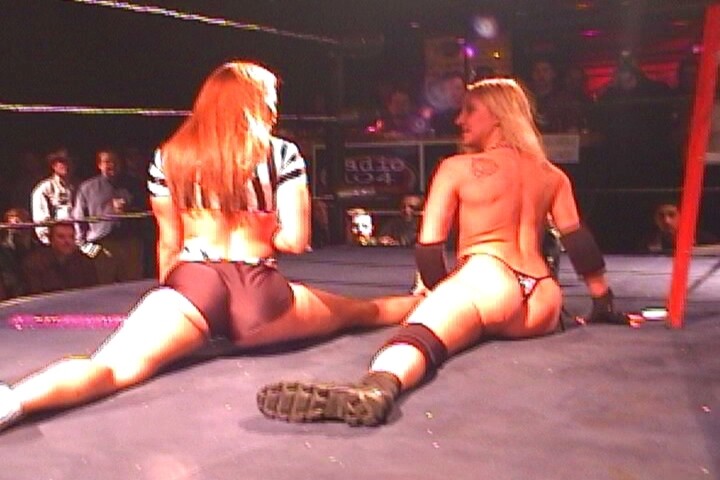 Just select "ADD TO BAG" and DOWNLOAD THIS FREE VIDEO TRAILER OF...

***MUST BE 18+ to view and purchase, as the video does contain language, and nudity.***

The Dangerous Women of Wrestling do it again as the “Innovators of Dysfunctional Family Entertainment”, as we bring the second edition of the " BEST OF ICES 2", titled "EXOTIC ICES".

PLEASE NOTE! THIS VIDEO WAS COMPILED TO SHOWCASE ICES. CLIPS WILL INCLUDE HER IN ACTION AS A REFEREE, DANCING, AND OIL WRESTLING. OTHER MATCHES NOT INCLUDING ICES AS A MAIN COMPETITOR, WILL NOT BE INCLUDED IN THEIR ENTIRETY.

This is no ordinary VOD. This video isn’t about some girl who came up the ranks of pro wrestling to become a Women’s World Champion --no ICES never need a belt to prove her worth! In fact, ICES was and STILL IS thee all time hottest referee to ever grace the squared circle. Even GLOOW & DWOW's 12x12 custom wrestling ring!

After we released the VOD "COLD AS ICES" (volume 1 best of Ices), we've been asked many times to produce another title of this stunning beauty, and talent, and now it's available for instant downloading and immediate viewing.

Read about the entire show, see ALL the video screen shots, and download the ENTIRE video now

"EXOTIC ICES" has been compiled from her appearances and performances for GLOOW / DWOW. You will see this beauty "in her element", doing what only she does, as no other referee can do. You will see her dance, shake, and move. We’ve even included ICES oil wrestling!
Scene Listing:

-ICES is introduced to the rowdy fans at the Woodshed II in Riverside, NJ to ref the match between ELLE MAE and BABYDOLL. 09-12-00

-ICES hits the ring for a dance at the Eagles Hall in Levittown, PA to ref a match between MICKIE JAMES aka ALEXIS LAREE and PSYCHO BYTCH. 10-12-01

-ICES with various in ring dances at Tuxedo Junction in Danbury, CT and also officiates TARA vs BAR ROOM BARBIE aka BOBCAT. Ices also ref'd the amazing "missile on a pole match", and we see her interacting with a very topless GI HO, as the two play around in the ring together. 01-09-02

-ICES mesmerizes fans at the Cellblock in Williamsport, PA with her hips and dancing. She also was the ref for SINNAMIN and DAWN MAE too, with plenty more in ring dancing too. 07-25-02 / 10-17-02

-ICES caught backstage in a promo for DWOW TV backstage at Froggy's Bar & Grille in Dover, DE. The fans absolutely devoured ICES many in ring dances, as the place was packed, and having a great time. Ices also gives some t-shirts away in ring to some lucky fans. 09-19-02

-3 WAY OIL WRESTLING MATCH between ICES vs. AMERICAN CREAM PIE vs. G.I. HO (Elimination style). This is rare video footage that must be seen for all ICES fans --and all fans of all female oil wrestling. Also included is the "manager" pre-match oil down, where ICES gets drenched in baby oil. Enjoy the video as the oil permeates her nice bronzed skin, as the oil drenches her white, wife beater style t-shirt, as it becomes SEE THROUGH! This is GREAT VIDEO! 09-19-02

THIS VIDEO WAS COMPILED TO SHOWCASE ICES. CLIPS WILL INCLUDE HER IN ACTION AS A REFEREE, DANCING, AND OIL WRESTLING. OTHER MATCHES NOT INCLUDING ICES AS A MAIN COMPETITOR, WILL NOT BE INCLUDED IN THEIR ENTIRETY.

Production: Compiled videos from various events. Multiple camera angles are provided when available. There is no play by play announcer, other than coming from MC at each event. Videos have been edited to make viewing a bit more pleasurable.

AND AGAIN, we hope you enjoy this special video compilation featuring ICES, as we did producing it!
Save this product for later
Display prices in: USD