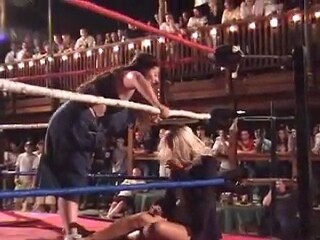 Over the years we have been asked via email, DM, or a post on social media if ICES, GI HO, GINGER, BABYDOLL and other hot girls have given STINKFACES... Today, is YOUR LUCKY DAY!

"STINKFACES AT WANDA'S" was a live, full women's wrestling event at Wanda's in Mechanicsburg, PA. Originally, this video was to be titled "WEEKEND AT WANDA'S" --that is until ELLE MAE received 4 STINKFACES from some of the hottest beauties and stars of GLOOW / DWOW. In fact, it would've been 5 STINKFACES --but LINDSEY, from the crowd, didn't go full into ELLE MAE's face, but we all get to see her lovely ass in a thong! Also, for ELLE MAE fans don't worry, she delivered one of her certified STINKY FACES to JEREMY of the RING CREW earlier in the show.

DOWNLOAD THE FULL SHOW NOW AND SEE IT ALL!

ISABEL aka ICES started the show off with her sexy in ring dance. It should also be noted that this event took place outside on the beach deck. There is a nice crowd assemble here to see the girls wrestle.

An unnamed local radio DJ made some announcements and tried to be funny. Wasn't happening.

The sexy KRISTEN J. COX VP of GLOOW came to the ring to set the law straight on this evening, as ELLE MAE was in for a tongue lashing by the exec, and was promised ass beatings by the locker room.

Elle disposed of the bubbly Ginger.

THE SOUND GUY entered the ring to set some guidelines up.

Ms. Cox returned with KIT KROTCH aka AMBER aka GI HO. This was s good match up with some great in --and out of the ring action as the girls took to the sand and battled up the stairs on the deck, around that bar, and back down to the sand, and in the ring. Elle was able to topple KIT KROTCH, as she licked her chops for her next victim.

Kristen Cox made another appearance, this time with BABYDOLL --ELLE MAE'S arch nemesis. Elle Mae laughed off the much smaller Babydoll. Babydoll put up a better fight as she is getting a bit better maneuvering in the ring.

KRISTEN COX then through her mini skir into the ring to face ELLE MAE. Bad move, but loved seeing the sexy blonde Kristen at Elle Mae's will.

Jeremy of the Ring Crew came to save Miss Cox right before Elle was going to deliver her STINKFACE! That would've been EPIC!

Instead, Jeremy gets hit with a big splash, and then the BIG ASS of ELLE MAE and her patented STINKFACE. The crowd loved this.

THE SOUND GUY attacked Elle Mae from behind with a stop sign, sending Mae to the mat. Jeremy re-entered the ring, as Sound Guy held Elle as Jeremy taped her mouth shut, and then the guys proceeded to tape her to the ring ropes.

THE OIL RUMBLE led off the second part of the show as GINGER, KIT KROTCH, BABYDOLL, ISABELL AKA ICES, KRISTEN COX, AND ELLE MAE would battle it out. There was a ton of great sexy action as LINDSEY from the audience was chosen to be the oil girl. We got some GREAT entertainment as she squirted the girls down. MUST SEE STUFF HERE!

ICES oil wrestling is a treat! Once Elle Mae hit the ring, all the girls ganged up on her to take her out. They set her up in the corner and they all delivered their own splashed to the big girl. They then finished her off with a STINKFACE for each of them ONTO Elle Mae!!! Your dreams have been answered! You gotta see KIT KROTCH & ICES really deliver some deep, and rigorous STINKFACES out of the group.

After the STINKFACES, the girls pulled together to eliminate ELLE MAE, and then started to eliminate each other, until only two were left standing.

THE SOUND GUY stopped the match and auctioned each girl off for an oil wrestling manager. YOU HAVE TO SEE the girls in action. Think couch dance, but in a ring for everyone to see. The girls got all oiled up and finished the show GINGER vs KIT KROTCH aka AMBER aka G.I. HO in oil wrestling! It was very competitive, and very sexy!

FULL LENGTH VIDEO DOWNLOAD IS:
Rating: Rated R
Running time: 1 hour and 5 minutes
Resolution: 320x240
File Size: 331mbs
File Type: m4v
Production: One camera shoot. There is no play by play announcer, other than coming from MC at each event. Videos have been edited to make viewing a bit more pleasurable.
Save this product for later
Display prices in: USD