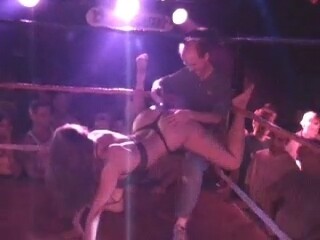 Just select "ADD TO BAG" and DOWNLOAD THIS FREE VIDEO TRAILER OF...

This show has been digitized, and fully remastered for release from it's original master video tapes.

One month prior, GLOOW -Gorgeous Ladies of Outrageous Wrestling took over SPORTSTERS in Fairless Hills, PA and tore the house down in front of a sold-out, jam packed, standing room only audience. Check that show out now by downloading HOT CHICK BEATDOWNS https://dwowvod.com/Hot-Chick-Beatdowns-Full-Show-...

The GLOOW girls are back with another standing room only packed house! The event starts off on a somber tone, as a ten bell salute to DANA DODSON was presented. Dana was a GLOOW girl who passed away suddenly a month prior. Dana was an amazing performer, and was very talented in the ring. She very well could've been the first "real" star GLOOW produced from their homegrown talent pool. She was a great entertainer that left us all too soon! Dana also appeared as "Raw Girl" on an episode of WWE RAW TV "The Pink and Black Attack" back on April 18, 1994.

As the show was about to start, the standing-room only crowd began to get rowdy, as we see many signs surrounding the ring. Some of them are pretty funny. The SOUND GUY hits the ring, and "Devils suck" chant started to break from the drunken Flyers fans in attendance. Devil are the state of New Jersey's pro hockey team, while the Flyer are Philadelphia's team.

The SOUNDGUY introduces the "round card" girls for the evening? First, a very young TAI, along with the debut of "King Kong" BUNNY. This is Tai's second show with GLOOW, as she is local to Sportsters area. Bunny is a petite, yet busty-blonde, with a great body. Tai also has a smaller frame, with a good body. The two girls seem to get into a disagreement as Bunny nudges Tai with her large, cardboard round card. The Sound Guy tells the girls to chill. They play to the fans for a bit, but we seem Tai and Bunny argue in the corner, as Tai seems to be antagonizing the older Bunny.

Next we get the debut of everyone's favorite referee, ICES. However, at this point of her in-ring career, she is being referred to as SAPPHIRE. Upon her introduction, she walks the outside apron to say hello to the fans.

The first contestant in match one is announced as ELLE MAE, enters the ring with a basket of food. The brown, wavy haired ELLE MAE is wearing her staple blue-denim overall jeans, black sports bra, and white dirty sneakers. While walking around the ring to surveil the fans, she decided it was a good idea to throw water on those in attendance.

Out next was AMBER, dressed in her KIT KROTCH attire. AMBER became the famous G.I. HO a few months later this calendar year. The athletic blonde wore a pressed, dress white shirt with a tie and open collar, and just a thong underneath. She sported a black hat on her head --this was a real 9 1/2 weeks look she was sporting. There is a spot when she takes off her white blouse, and her boob is exposed. At this point, AMBER is a huge crowd favorite!

Next GLOOW goes to a quick intermission to set the ring up for oil wrestling.

First is a three-way elimination style Oil wrestling match between BABYDOLL vs JUNGLE JANE vs AMBER.

Next oil match was the first-ever "ROUND CARD GIRL OIL MATCH" as TAI takes on BUNNY (later to be BUNNY BUSH).