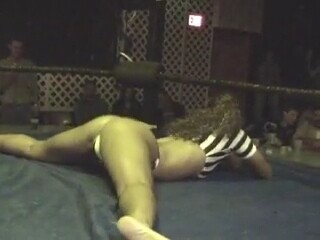 By MAJOR DEMAND... DWOW finally brings you the "BEST OF ICES"

Download the newest FREE video trailer download proving that the Dangerous Women of Wrestling are truly the “Innovators of Dysfunctional Family Entertainment”. However, this isn’t just any VOD. This isn’t about a former Women’s World Champion, or wrestler for that fact, but for thee hottest referee to ever grace the squared circle --ICES.

***As far as we know, there has never been a full video compilation of a wrestling referee --demanded by the fans, and released by a company in the history of pro wrestling… THAT IS UNTIL NOW! Thank you ICES!***

This video compilation takes the viewer on a vast journey of the debut year of ICES with the GORGEOUS LADIES OF OUTRAGEOUS WRESTLING / G.L.O.O.W. & DANGEROUS WOMEN OF WRESTLING / D.W.O.W. Enjoy rare video footage as ICES finds her way in and around the ring, learning her craft of being a wrestling referee “on the job”.

Debuting as SAPPHIRE in front of a rowdy and rabid audience at SPORTSTERS in Levittown, PA, she made herself comfortable in the ring, and became an INSTANT fan favorite. Additionally, the staff and entire locker room fell in love with her and began their lust for the exotic ICES…

Quickly, she swapped her ring name to ISABELL, and even ISABELLA at times. This name seemed to be more fitting for her, as she used it for most of year one, before finally settling on ICES. Yes, we had to change the spelling due to a certain group of terrorists in the Middle East.

ICES is a true, certified entertainer. No one who ever entered the GLOOW / DWOW ring danced and moved exactly like ICES. There have been other sexy, and enticing dances from others in our ring, but no one could mesmerize a crowd like ICES. NO ONE!

Luckily, before she went full time wrestling referee for the company, ICES participated in some really sexy, and competitive OIL WRESTLING matches. Ices took pride in her performance, and always wants to win, win, win!

ICES could bump and grind her ass like no other as she hypnotizes fans ringside, and on TV with her very sensual and sexual moves. ICES made the “REF DANCE” legendary.

If you’ve never witnessed an ICES ref dance be prepared, and be excited as these near perfect performances are also included on this instant video release.

This video of ICES has been compiled around her appearances and performances for GLOOW / DWOW. You will see ICES in her element, doing what she does as a referee trying to keep the peace, and be fair to each competitor. You will see her dance, shake, and move. We’ve even included ICES oil wrestling!

We hope you enjoy this special video compilation featuring ICES, as we did producing it!

-Isabell works as referee, ref dance, participates in Oil Rumble, Isabell delivers a stinkface ON Elle Mae, faces Ginger one on one in Oil Wrestling 081600

***These details are for the FULL SHOW VIDEO DOWNLOAD AVAILABLE NOW HERE: