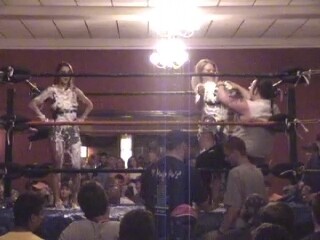 The Gorgeous Ladies of Outrageous Wrestling aka GLOOW aka The Dangerous Women of Wrestling invaded the Eagles Club in Waynesboro, PA. This was the biggest event of any kind that passes through this small, forgotten town. Even bigger than the pop up circus, with the bearded woman. We have that too!

Fortunately or unfortunately, this show was shot with only one stationary camera. Hey, we're low budget, what do you expect? At least there is video evidence of this entertaining event.

The SOUNDGUY welcomes the fans to the show, as he introduces the "Bootylicious" BJ. However, there was no booty shaking ref dance on this outing, to which she received boos and some cheers. Where is Ices tonight? Probably working the strip club and making more money in the city, where money makes the world go round.

TARA makes her presence known as she is verbally assaulting everyone in this building. This crowd is pretty lively and not making it easy on the busty one. You will enjoy seeing people walk in front of the camera on occasion. Who knows, maybe they didn't see the tripod, or even know what a video camera looks like...

"White Trash" BUNNY BUSH enters the ring and wastes no time getting comfortable removing her shirt to show off her "upper body strength." The fans are enamored with Bunny, as she grabs the mic, as "she's a crack whore" chants break out in Waynesboro.

The F.B.I. aka FULL BREASTED ITALIAN enters the contest and throws herself into the "Best Body Contest", as she takes off her blouse to display her assets.

Voting begins with the crowd, but the FBI attacks Bunny, and a catfight ensues. Tara joins in choking Bunny. Tara is now delivering the bulk of the beatdown. See the full video for the entire contest.

DARLENE CONNOR is in the ring to start the second contest, and more berating of the fans at ringside. Not saying they deserve this, but this is the most attention they've received from hot girls ever.

Her opponent CANDIE makes her entrance into the ring, and is a crowd favorite, as a "she's a slut" chant breaks out for Darlene. The two girls begin a popularity contest posing in each corner, as we eventually get into a wrestling contest. During the match, the SOUND GUY appears at ringside and helps Darlene, by pulling Candie's hair, as well as clocking her with a drink, to which various degrading chants broke out in honor of the Soundguy. Darlene manages to score the pin, but you should see all the action for yourself by downloading the full video on our website.

The "best part of the show" has hit the ring, as THE SOUND GUY is holding court in the ring. He says he's the best part, that is very much to be debated!

MAIN EVENT of the "wrestling" part of the event is TAI KILLER WEED vs. G.I. HO. There are plenty of pre-match ring antic by both girls, to the delight of the rabid fans on hand. There seems to be some children in here tonight... SMH... Waynesboro, not the home of the finest parenting obviously. Who knows, maybe they couldn't find a babysitter on this night, as maybe the whole town is at this EVENT!

The girls wrestling in the ring, and then fight in the crowd --which everyone loves! G.I. HO even hits a dive from the ring to the floor onto the Sound Guy. SG interferes in the match, as Tai hit a big crazy leg drop on the ho. CANDIE is back and hits her finisher the "Rock Candy Bottom" on the Soundguy. SG even gets the three count on his man parts, as Candie wales away at the ring bell strategically placed. Tai and GI Ho both hit splashes on SG, while Candie chooses to hit a stinkface on SG to finish him off.

The ring is then set for a specialty --first time ever in GLOOW, a SHAVING CREAM WRESTLING MATCH which was originally supposed to be BUNNY vs FULL BREASTED ITALIAN, but ended up trading spots with TARA. Tara is managed by the FBI, while BUNNY gets a manager from the audience to lather her up for the big match. There was a lot of rolling around, and cat fighting. There's too much going on to write, so see the entire video now on dwowvod.com

MAIN EVENT PT 3 - HOT OIL WRESTLING MATCH between G.I. HO and TAI WEED. Both girls really know how to entertain the masses. The Sound Guy even had to interject as the girls were getting "too into it", as there were some minors present. Dumb people, could've gotten the entire show, but got a rated r event. Anyway, both girls had managers from the audience that oiled the girls up. Oil matches are three, one minute rounds. The girls even grabbed the oil bottles and were squirting oil everywhere on each other. We had some great actions and takedowns. GI HO like to get rough in the oil matches, and this one was no different.

During the second intermission of the match, The Sound guy introduces two girls from the audience that want to team up to face HO & WEED in oil. Even though the two girls didn't strip down because they weren't wearing underwear, it was a fun bout.

BONUS VIDEO included of post show breakdown, and idle chatter. Camera was left on during post show. Be a fly on the wall. Hear and see some stuff, not normally left on retail sold shows.