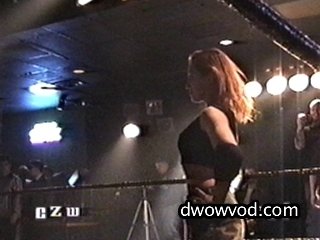 The crew from GLOOW / DWOW "invaded" a CZW men's pro wrestling show, at Froggy's Bar & Grille in Dover, DE back in February 2001 to promote the debut Gorgeous Ladies event "Fall Out at Froggy's" that would take place in March of 2001. This is RARE footage as it was NEVER released by DWOW before.

THE SOUND GUY marched into a hostile CZW ring to introduce himself, and rail the audience in attendance.

During the Sound Guy's rant, G.I. HO appeared to confront the Sound Guy. The fans in attendance were REALLY into G.I. Ho! You see CZW rarely ever had women on their shows back then, so this was a special treat.

The Soundguy started to harass and degrade G.I. Ho which led to a physical confrontation.

ELLE MAE appeared, and we have an "unofficial match" underway, as the girls now brought their feud to Dover, DE... and it was coming FULL BLAST in March 2001!

The girls did their best to entertain the fans in and out of the ring. G.I. Ho did a top rope dive onto the Soundguy at ringside. Elle Mae hit some body splashes --and YES even showed that popular butt with her patented stinkface. The fans LOST IT! A must see.

Production: One camera, no announcers