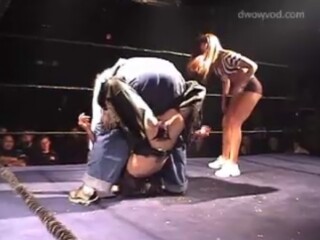 LIMITED TIME OFFER! Download THIS instant video download and ALL of our STINKFACE videos on the site FOR A LOW ONE-TIME PAYMENT at dwowvod.com! Save a ton of $$$, view all the titles included in the SUPER STINKFACE SPECIAL SALE, order, and download instantly and immediately! Download-to-own for your personal collection forever! Do it now, before time runs out! Click the link for all the details https://dwowvod.com/$99-SUPER-STINKFACE-SPECIAL-IN...

Please be 18 and older to view and purchase, as there is foul language, topless nudity, and bare ass-ets exposed.

This is the second video download installment in our new series, "STINKFACE SINGLES"!

This video contains the entire single match, and is fully produced, with a two camera mix, and a special replay and slow motion loop to end. Both angles have been re-edited and mixed fresh for this release.

Action picks up with DAWN MAE in the ring, as TAI "KILLER" WEED is making her way through the audience with a pizza box?! Not sure if she is going to fight Dawn Mae, or feed her! Dawn Mae just disposed of BRITTNEY "THE SCHOOL GIRL" as she dominantated and crushed the newly boobed schoolgirl. Check out that video download too!

Dawn is wearing her patented denim-blue, long overalls. She is also sporting a white sports bra, and her shiny red mane. She is also wearing a pattens thong, but more on that later.

TAI is wearing her black, patented leather chaps, with a black thong, and fringed leather bra top. She is tattooed on various spots on her small body, including around her breasts, but more on that later.

Tai is very aggressive and spunky. She starts by hitting Dawn Mae in the back of her head with the pizza box. Where's my pizza? Wrong match...

Dawn Mae dominated Tai mostly throughout the bout. There was some slight offense for Tai at points, as she jumped on her back, rode, Dawn Mae around the ring (on her back),

Dawn locked on a standing pendulum on Tai --a shot, and maneuver that is amazing. This shows the creativeness of Mae, as well as the athletic flexibility on Tai's part to be wrapped up like a pretzel.

Tai even ripped her top of to expose her bare breasts, as she runs around Dawn Mae and hit's her crazy, topless leg drop --not once, but twice trying to get the pin on the much larger Mae.

Dawn put a good humiliation on Tai, and even opened hand slapped her in the face a few times. Almost like she was just toying with Tai.

The SOUNDGUY seemed to be cheering Dawn Mae on at times, that is until he slammed her in the face with a mixed drink and ice went flying everywhere, which led to setting Mae up for Tai to capture the pin.

Post match, The Soundguy was arguing with ICES the referee, when DAWN MAE delivered a devastating low blow, ball shot to the Soundguy buckling him over, and setting him up to be splashed into the corner, where he laid almost lifeless.

Dawn Mae begin motioning for the Stinkface, as she was waving her arms, and hitting her butt cheeks with her hands. One strap undone. Then the other. Dawn drops her draws and backs up on the Sound Guy for a stinkface! And she got him good!

The Soundguy was not happy --but the fans were, as Ices was shocked at what just transpired.