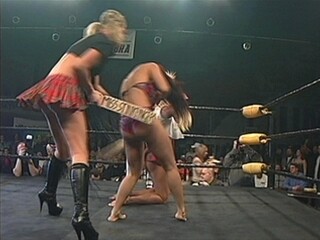 Check out SEASON 2 (12 episodes) by downloading all the episodes here... https://dwowvod.com/TV-Show-Season-2-Dangerous-Wom...

Over 786,000 viewers on YOUTUBE have seen mini video clips of the "NEW" DWOW TV SHOW PILOT, but RIGHT NOW you can INSTANTLY download the entire TV episode (NO COMMERCIALS!!!). Watch IMMEDIATELY, WHENEVER, and WHEREVER! Purchase now, own for your personal collection F-O-R-E-V-E-R!

For the first time ever see the NEW DWOW TV PILOT in its entirety. This is the same version that TV executives were the only ones privy to see this video --that is UNTIL NOW!

This pilot, was the "next" step in the DWOW TV production process. This pilot is full produced from top to bottom with clean video show (good lighting), good sounding audio, music, effects, and graphics. Enjoy the full episode, commercial free.

"The Queen of Extreme" Francine makes a RARE DWOW appearance as an authority figure, who does NOT like the two girls making out.

Eric Garguilo opens and host this episode of the Dangerous Women of Wrestling TV Show (TV Pilot). Eric looks good, and sounds energized, as he delivers a brilliant opening describing what the viewers are about to see on the show. This was a perfect opening for anyone new to DWOW and their dysfunctional TV show.

Eric is then interrupted by a production assistant saying that there is action in the arena and they are cutting to it now.

Eric is joined by Steve "The Sound Guy" on color commentary, while he handles the play-by-play.

The video cuts to the arena where the camera work is shaky, as Jessica Blade bursts through the entrance way with a handful of Jane Bond's as they make their way down the entrance ramp, and around ringside.

College girls go crazy! We have a full on CATFIGHT! The girls boobs flying out of tops, but they are masked out with a blur since this is for a show for TV. Jessica and Jane are hot as F! These two girls are really giving it their all and going at it hard. This is a very sexy, and physical confrontation! THIS IS A MUST SEE.

This match was taped at the former ECW ARENA in South Philly, and is wall to wall, jam packed, sell out crowd of over 1200 people in attendance. There are at least two dozen ringside photographers from around the world capturing the action at ringside. The fans are eating this crazy, hard fought catfight up!

After some AWESOME ACTION, two more hot schoolgirls enter the ring with wooden paddles. Tennille (aka Nurse T) and Talia (aka Velvet Sky) Tennille and Talia both grab each of the girls by their hair. Tennille starts to swing the wooden paddle hitting Jane Bond's ass, while Talia is taking liberties hitting Jessica Blade's ass with a wooden paddle. EXCELLENT ACTION! The place is going nuts! Can we get an uncensored version PLEASE!

Candie is seen on the phone talking, while Angela is coming up to the back entrance of the arena from her side. Candie snaps at Angela for getting in her way, which takes Angela off guard. Cris "The Cross Dresser" aka Candie's current interest opens the rear entrance door for an agitated Candie.

Candie snaps at Cris, while Angela is all disheveled gathering her belongings. Candie gets off the phone, and Cris is going to get an earful, while Candie slams the door in Angela's face.

Elle Mae is standing outside a bathroom stall talking about Cristol and Liz Savage. She then bangs on the door and asks Poppa Mae if he's done yet. Big Poppa Mae yells at Elle not to rush him.

Cristol and Hoberto speak on their dislike for the Maes.

We see The Smoke all decked out in his finest K-Mart red suit, as finally he returns to DWOW.

Angel Orsini aka the FBI aka Full Breasted Italian is seen backstage in the locker room, decked out in her official authority gear. She begins to speak on what's for lunch. She like peppers and sausages, not sushi (fish).

Poppa yells at Elle Mae, as there is no toilet paper to finish the job.

A very sexy Tai "Killer" Weed is seen in the locker room flirting with Lucky "The Cripple Guy", as she asks him how much can he bench. Tai instructs Lucky to "get on the ground" now.

Angela makes it through the door, as Cris helps her with her things. They seem to make a connection. Angela sees Candie returning, as she (Candie) begins to bitch at Cris.

We then see the very sexy, dirty blonde Tai with her foot (in black high heels) on Lucky's back as she is humiliating him, making him do weighted push ups. Tai looks amazing. She is in a schoolgirl type outfit, with a pink plaid (very) mini skirt and matching bra top, with thigh high black stockings, and black heels. TOTALLY HOT!

They cut back to The Smoke talking about "Pryme Tyme" Amy Lee. Speaking of Amy Lee, she appears on the screen next talking about keeping her World title with her. Amy has the gift to talk shit for sure!

FBI is back talking about her sausage and meatballs, "that's the way she goes..."

Tables, ladders, chairs, as FBI is looking forward to her match with Sumie Sakai.

Tai walks out on Lucky. Damn Tai looks great in this outfit!

An almost naked Poppa Mae explodes out of the bathroom stall ready for his match with Dawn and Elle.

Eric Garguilo is on camera setting up the number one contenders match as Angel Orsini aka the FBI takes on Sumie Sakai. The winner of this match takes on the DWOW Women's World Champion "Pryme Tyme" Amy Lee in a future match up.

Eric sends the viewers to the ring, promising this match up to be a classic.

Sakai charges the FBI with a steel chair and misses, as the FBI turns around and nails a drop kick hitting the chair into Sumie's face, knocking her off her feet. Ices is the referee.

Sakai sends FBI to the ropes, in which she hits a large ladder sending it crashing to the guardrails. Someone could've been hurt in the audience. This place is packed. There are a ton of people INSIDE the guardrails, from VIPS, to press.

Both competitors exchange wrestling moves, back and forth. The action is quick, and high flying. The crowd is very loud and vocal during this match. There is too much to write here, DOWNLOAD THIS VIDEO NOW!

Also, there are some crazy jumps and bumps taken by these two women. Check out Sumie as she leaps off the top turnbuckle and misses the FBI, as she crashes through a table. Action again picks up and this time it is the FBI climbing a 16 foot ladder, in the ring, as she goes up and jumps on (tries to) Sumie. The FBI ended up shattering both of her heels. It's amazing she even finished the match.

Just prior to the pin fall, Sakai grabs Orsini aka FBI and kisses her on the mouth, before rolling her up for the three count.

Slo-motion playback of the FBi's fall. It's brutal!

The show ends with some previews of upcoming matches on what would be new TV show episodes.

THIS SHOW IS MUST SEE TV FOR SURE!

***THIS IS A DIGITAL DOWNLOAD PRODUCT*** NO REFUNDS*** EXCHANGES only.