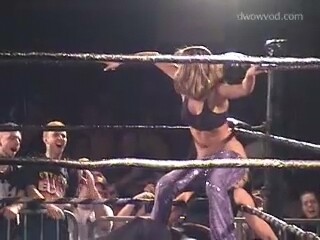 Please be 18 and older to view and purchase, as there is foul language, and bare ass-ets exposed.

This is the first video download installment in our new series, "STINKFACE SINGLES"!

CANDIE vs DARLENE (No DQ match)

This video contains the entire single match, is fully produced with promo (vignettes) prior to the match, as well as a two camera mix, and a special replay and slow motion loop to end.

This match comes directly from a TWZ (The Wrestling Zone) event hosted at the Boathouse House in Norfolk, VA --that our GLOOW / DWOW girls invaded. Our camera crew was in the building and captured this "NO DISQUALIFICATION" match between the beautiful blonde CANDIE, and one of her hated enemies DARLENE (aka COLLEEN). All the action was captured with two cameras views, one from the stage, and the other roaming at ringside.

Prior to the match, both girls were caught outside the Boathouse talking badly about the other. Both girls are in good shape, and both attractive. Darlene is a short haired brunette, while Candie is the blonde, and fan favorite.

The fans were ready and rowdy for this action packed match up in --and out of the ring. The crowd was very vocal for both female wrestlers. This match included pro wrestling maneuvers, as well as fighting outside the ring, some catfighting, some weapon's used, as well as a STINKFACE!

Watch Candie drop her skin tight, purple sequined pants to expose here thong and bare butt cheeks, as Darlene was helpless in the corner as Candie delivered the goods, as the crowd went absolutely crazy!