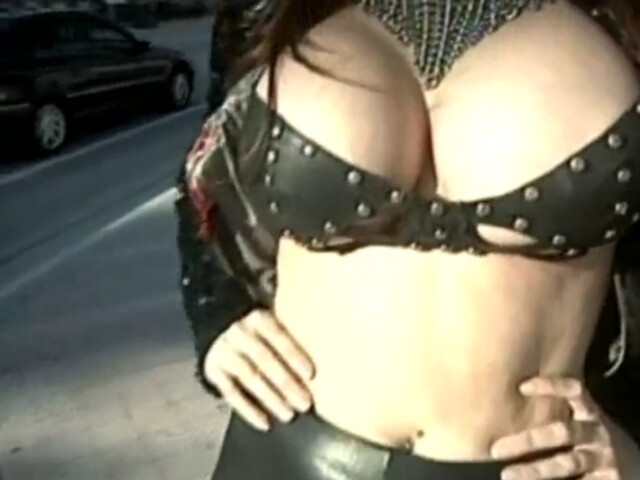 Next we get glimpse of Fort Lauderdale beach strip as "The Queen of Extreme" FRANCINE literally stops traffic on the street as SO CAL VAL is showering her with compliments. So Cal is really kissing butt.

The busty brunette VANESSA HARDING is posted up on a palm tree is sunny Fort Lauderdale. She has a massive --and fantastic pair of tits.

Rumor Queen BECKY BAYLESS gets off the elevator and meets up SO CAL VAL, as she is guarding a door, so Becky doesn't trespass.

Firey red head DAWN MAE is talking about her match against CRISTOL, and other things. She said there's no POPPA MAE around, so she will handle business by herself.

The GHETTO GIRL CRISTOL is ready to take on DAWN MAE and tells the viewer so.

One hot blonde KRISSY VAINE is seen fixing her makeup in her backstage room, as she is interrupted by JENNY TAYLOR, as the girls start to go at each other grabbing each others hair, while ICES gets between them telling them to save it for the ring. Francine walks in during the commotion and tells them both they will be facing off in a hair vs. hair match.

ROLL the WEW opening highlight video. Mysteriously using the Dangerous Women of Wrestling theme song. That is not an edit, nor misprint.

WEW's lone announcer ERIC GARGIULO is escorted to the ring by the two hottest NURSES T & A!

BECKY BAYLESS interrupts Eric, and claims she has major gossip to spill. She claims that she knows who the new GM of WEW will be, as music plays, and out comes SO CAL VAL dressed in a business suit. The two exchange pleasantries, and Bayless is asked to leave the ring.

MUSIC HITS. FRANCINE is decked out in a super tight, and very revealing mini skirt, as she makes her official in ring debut in WEW --and she looks f'n hot! She announces that she is the new GENERAL MANAGER of WEW. Francine's claims that the WEW Title is now vacant, and the last two women standing after the 20 woman battle royal will be the two participants in the WEW World Title Match.

THE GORGEOUS ONE GEORGE interrupts and is now in the ring. GEORGE thrusts towards SO CAL VAL and takes her out.

CHRISTI RICCI is backstage talking about her issues with PERSEPHONE.

PERSEPHONE then informs everyone where she's been, and what she will do to RICCI later.

ERIC GARGIULO is backstage talking about how hot it is to work at WEW, and that they've been receiving a lot of demo tapes, which he intros now.

The viewer is treated to two hot women in a pool, as clothes start to come off, and they start to oil each other up. These two hotties enjoy the water, oil, sun, and each other. Nudity is in full effect.

BACK IN RING. ICES entertains the fans at ringside in Ft. Lauderdale, FL. Ices is looking fabulous as always dancing and teasing the crowd. Her body is in great shape, and she looks to be growing her hair out.

NAV-A-HO is sitting near the beach thinking about her people.

BACKSTAGE. We get an AMAZING shot of both NURSES backstage in the bathroom, as they are talking, but looking at these fine BUTTS it doesn't matter what they are saying. Both Nurses flirt with each other and start to explore each other's body.

More from Eric backstage introducing another "tag team" video. We go to the hot tub with what looks like twins, as they start with bathing suits on, but that doesn't last thankfully. Both of these young women are incredibly beautiful.

MATCH: "Hair vs Hair" "SPECIAL K" KRISSY VAINE vs JENNY TAYLOR (and the loser does get their hair cut at the conclusion of the match)

BAR. TAI "KILLER" WEED is at a local South Florida watering hole, getting the guys all worked up, as she is drinking and standing on the bar.

NURSE T&A come to the ring with handfuls of Mardi Gra style beads.

BACKSTAGE. Eric Gargiulo backstage with DAWN MAE. He tells her she is going to help him look at the new talent, which she's not happy about. MORE girl on girl action with a hot blonde, and a hot asian who use their tongues liberally on each other. These girls are hot! Definitely would like to see these two go HARDCORE!

MATCH: 20 GIRL OVER THE TOP BATTLE ROYAL with the last two competitors standing to face each other on the next WEW pay per view for the Women's World Title.

Tai Weed and Pussy Willow survived the Battle royal in a 20-Women Battle royal; Final two will face off for the vacant WEW World Championship.