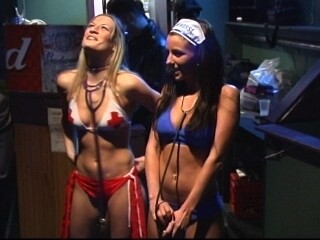 Never before has such a compilation been produced on the NURSES and offered --UNTIL NOW!

THE NURSES are UNCUT, and UNCENSORED!

Download and watch all the wild in ring adventures as NURSES T, A, and D nurse female wrestlers back to health with their patented mouth-to-mouth resuscitation, as well as dancing, grinding, and teasing all the fans.

DID YOU KNOW? This fun act had only three members. It started with NURSES T & A, but after NURSE A accepted an acting gig, NURSE D came in to fill in for A. NURSE T & D, also went under the names of XCTASY & PRECIOUS at one point.

WHAT'S ON THE VIDEO EXACTLY?

First, it has all the appearances of the NURSES in DWOW. There was some shows at Froggy's Bar & Grille that DWOW partnered with WEW Women's Extreme Wrestling to film the shows as well, so you may notice that.

Second, we have included each individual camera angle of the Nurse's "ring time". Meaning, the cameras are unmixed, and most of the appearances have two camera angles, BOTH which are included for your viewing pleasure.

Third, we also found and included backstage, vignettes, and other appearances --like that one time NURSES T & D went and visited Trenton NJ College. Or that time NURSES T&D competed in a lingerie contest on stage in front of a rambunctious audience in a nightclub in NJ. Or how about that one time at the First Union Center in South Philadelphia where T&D were some of the very sexy round card girls for Saturday Night Main Event Boxing, along with the HEAVENLY ANGEL and GI HO. Plus check out some hot backstage footage the girls shot with GI HO!

It is highly recommend that you use high speed internet to download this video as it is almost 7 gigabytes. If you try to download on your phone, you may run into broken connection, or timeout issues. Download to a computer, tablet, gaming system, then transfer to your phone if you wish to view on that device.