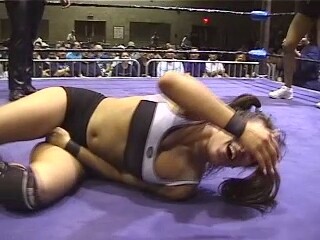 Women’s Wrestling fans Worldwide know and respect MICKIE JAMES. BUT --before she was ever famous, a diva, WWE Women’s World Champion, or TNA Knockouts Champion, MICKIE JAMES wrestled under her alias --ALEXIS LAREE.

Before MICKIE JAMES won the WWE Women's Championship at WrestleMania 22, a title she has held a total of five times since, or the TNA Knockouts Championship --she worked and wrestled many a nights for G.L.O.O.W Gorgeous Ladies of Outrageous Wrestling and D.W.O.W. Dangerous Women of Wrestling many times. And lucky for you, we’ve captured her best, and maybe some forgettable moments all on video for instant downloading and immediate viewing.

Enjoy “THE BEST OF MICKIE JAMES as ALEXIS LAREE! Own and enjoy 7 big historic matches and one hour and fifty-two minutes of women’s wrestling action!

Notes: Matches are shot with one and two cameras when available. There is no play-by-play, or announcer, other then that what is happening at live event.