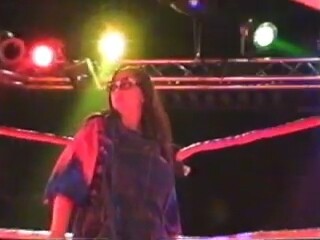 Full Disclosure: This video is not for everyone. This video is not for wrestling purest. The camera work is shaky, and at times, not good. The video has been edited to counteract camera work at times, but we ensured that the raw-feel of these events are still in tact while viewing. The lighting at times is low, and horrible at some points --but you can see the action. The audio and video has been touched up. We have tried to brighten and adjust the contrast, as well as used a colorizing filter plugin. The audio has been realigned.

This video contains historic video footage in the realm of women's pro wrestling, and entertainment. Please download and watch the video trailer to get an idea of what to expect, before purchasing.

We are happy to offer this historic video compilation of the original big girl of the GLOOW (Gorgeous Ladies of Oil / Outrageous Wrestling), the DWOW (Dangerous Women of Wrestling), and WEW (Women's Extreme Wrestling) -- ELLE MAE!!!

Known for her size, power, attitude, and of course her finishers, the BIG SPLASH and STINKFACES! Elle Mae never discriminated against punishing and putting a beating on any of her opponents --in or out of the ring.

Hailing from Mudlick, Kentucky aka MAEVILLE USA, Elle Mae made her presence known in pro wrestling with her debut match against LITTLE HEATHER aka BABYDOLL. Elle's family is large and in charge in Women's Pro Wrestling. Elle Mae's presence opened the floodgates for the entire MAE family. BIG POPPA MAE sat at the top of the food chain --errr dinner table, followed by the red headed sister DAWN MAE. You can't forget about her other large sisters DAISY MAE, and SAMMY DAVIS MAE. And of course everyone's favorite runt (and male) of the litter, LIL DAVEY MAE. Together this family wreaked havoc in GLOOW, DWOW, and WEW respectively. No single wrestler, or faction was safe from ELLE MAE and her quest to rule the women's wrestling landscape.

This BEST OF COMPILATIONS chronicles "YEAR 1" --the MAKING OF ELLE MAE...

The original master tapes have been dug out of storage, recaptured and digitized to start to recap this incredible journey of farmgirl, ELLE MAE. A lot of the past events Elle Mae participated in were only ever seen on VHS video tapes sold online, and at live shows --if even that. Most of these masters have sat in boxes waiting for the day to be seen. Today is your lucky day!

When ELLE MAE began her storied career in the wrestling business, she started with very limited in ring skills or experience. While Elle did participate in some wrestling training, between her shifts on the farm, she learned a lot being in the ring, and working through her matches and mistakes on other peoples bodies. Thankfully she never severely hurt herself, or anyone else, but anyone who faced her always needed time to recoup after there fights.

Plus, there are TWO BIG Stinkfaces included on this video compilation.

Plus two bonus matches and a SNEAK PEAK at "MAKING OF ELLE MAE... YEAR 2"