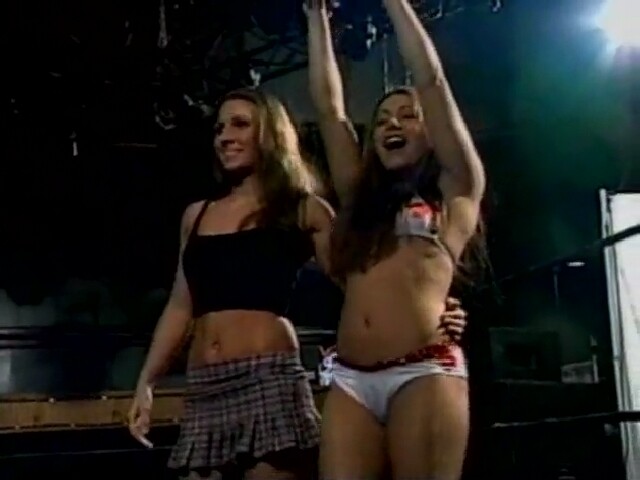 ***This is an instant digital video download*** Upon completing your purchase, download links are provided at time of purchase***

YOU MUST BE 18 OR OLDER TO VIEW & PURCHASE THIS VOD. NO EXCEPTIONS!!!

"AS GOOD AS SHE GETS"

- ANNIE SOCIAL and her hot blonde girlfriend BAILEY go to Gold Fingers Extreme in New York to audition for the PWO aka PUSSY WORLD ORDER
-Highlight video for show (notice the Dangerous Women of Wrestling theme song playing during the video)
-In ring opening at Froggy’s with ERIC GARGUILO, with ring announcer JOEY JAMES, NURSE T, and ALERE (NAV-A-HO) dressed as referee
-Gossip Queen BECKY BAYLESS comes to the ring spewing rumors
- TARA storms the ring, and starts railing the lame ring announcer, and then begins to go on her rant
- STEVE “THE SOUND GUY” interrupts TARA’s rant, and starts to go one talking about BRITTNEY THE SCHOOL GIRL has the best body in the company
- ANNIE SOCIAL then comes to the ring to dispute TARA’s claim to have the best body. ANNIE SOCIAL breaks into her ring dance
- LIL DAVEY MAE hits the ring and beats down ANNIE SOCIAL, as POPPA MAE is yelling at ringside
- BAR ROOM BARBIE now hits the ring to save ANNIE SOCIAL and attacks LIL DAVEY MAE as the too exchange some in ring moves, and some hard face slaps
-A tag team match is announced
- BAR ROOM BARBIE then grabs the mic, and this blonde looks amazing, as nipples are popping through her top, and she grabs the mic and starts to deliver some classic lines ripping people, including TARA, and then starts to show off her body
- MATCH: (INTERGENDER HANDICAP AUSTRALIAN TAG MATCH) BAR ROOM BARBIE vs BIG POPPA MAE & LIL DAVEY MAE
- ERIC GARGUILO on camera
-Backstage promo with LIL DAVEY MAE, DAWN MAE, and BIG POPPA MAE
-Backstage promo ANGEL ORSINI goes on to talk about the RING CREW
- TAI KILLER WEED backstage promo
- BECKY BAYLESS promo on the phone spreading more rumors
-Crazy backstage fight and ruckus as PRYME TYME AMY LEE and ANGEL ORSINI get into it physically, as the entire locker room tries to separate the women
- PWO AUDITION as ANNIE SOCIAL is down on BAILEY putting in the work
- ICES entrance to the ring, then ring dance, and tipping session
- MATCH: “Kats & Crips” (truly a handicap match) PERSEPHONE W/ BT BARNUM VS. PSYCHO BITCH W LUCKY "THE CRIPPLE DUDE" (WEW for some reason calls him “DUDE”, while GLOOW / DWOW refers to him as “GUY”)
-ANNOUNCER on camera talking about previous match, and promotes up coming bout
-MORE of the PWO Audition this time BAILEY is returning the favor to ANNIE SOCIAL and doing what girls do to each other naked, as the girls are officially hired
- MATCH: "Be My Bitch Match” RIPTIDE VS. "SELF EMPLOYED"
-Announcer on camera talking more match
- KRISTI KISS backstage touching herself
-Back in the strip club BAILEY and ANNIE SOCIAL are now on the stripper pole naked doing sexy stuff
- MISSY “THE SCHOOL GIRL” is in the ring cutting a promo about her wrestling status, the royal rumble, and that she is destined to win the title
- BECKY BAYLESS and ERIC GARGUILO confront MISSY and her medical status
- NURSES T&D hit the ring for a “session” for everyone to enjoy
-More PWO auditions at the strip club as the manager grills the girls in his interview session with two beautiful women, as the one girl says she like to “eat pu**y”...
-TOTALLY uncensored audition, as these two sexy women strip out of their outfits and go at it.
- SIMPLY LUSCIOUS ring entrance
- ALEXIS LAREE (MICKIE JAMES) ring entrance
- MATCH: “Match For F’N Respect” SIMPLY LUSCIOUS vs ALEXIS LAREE (MICKIE JAMES) w/ ICES as the referee
-Back to the strip for more of these two new girls interview / audition
- MATCH: “INTER GENDER MATCH” TAVA vs MERCEDES (not Martinez)
-Backstage promo with SIMPLY LUSCIOUS
-MORE PWO audition up close and VERY personal
- MATCH: “Ho-Madness Battle Rumble” (Winner will be champion) Participants in order of appearance: “PRYME TYME” AMY LEE… before things start AMY just rips and tears into this audience. STEVE “THE SOUND GUY”, NURSE T&D, ALEXIS LAREE (MICKIE JAMES), BAR ROOM BARBIE, MERCEDES, PSYCHO BYTCH, PERSEPHONE, SELF EMPLOYED, RIPTIDE, SIMPLY LUSCIOUS, ANNIE SOCIAL, THE MAE FAMILY (LIL DAVEY & POPPA MAE), MISSY THE SCHOOL GIRL, PWO music hits KRISTI KISS, and TAI “KILLER” WEED.