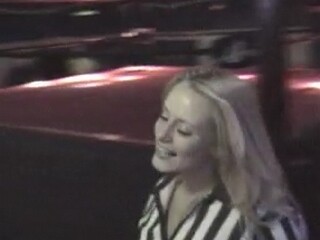 This is an instant video download. Download-to-own for your personal collection forever.

This is a very rare show that was never released --NOT even on VHS!!!

Enjoy this quick video trailer of what to expect when downloading. Remember the full video download is UNCENSORED!

We dug deep for this video! This is a very rare look at the girls of G.L.O.O.W. (GORGEOUS LADIES OF OUTRAGEOUS WRESTLING) as this event took place at Casey's in Allentown, PA. Some interesting things took place on this evening to note, even if there was not a lot of people in attendance.

BEFORE WE GO ANY FURTHER... We will be as transparent as one can be. This show has some entertaining moments on it for sure, but the lack of a good cameraman doesn't do this show justice, as at times the ring crew guy who took over the camera to film was totally inexperienced, and may very well go down in history as theeee worst cameraman ever to shoot a GLOOW / DWOW event --period.

The building wasn't lit for the ring, as the crew itself was dealing with a low ceiling on this evening. The show started with a somewhat mobile, and roaming camera view, but things really took a step back when this lazy camera guy put the camera on the tripod. This is the moment it seems either a button was pushed, or something with the focus was adjusted, and at times we get a blurry picture. He also decided to set up a decent amount of space from the ring.

HOWEVER --some interesting note. TAI "KILLER" WEED provided referee services for this evening, even including her version of the sexy ring dance. BRITTNEY "THE SCHOOL GIRL" was announced as the "round card girl"... even though we never saw her actually prance around with the ring cards during matches. She did seem to favorite the 6 and the 9 cards when she came to ring side. It also seems that TAI and BRITTNEY don't care for each other at this moment in time. We are not sure if this is part of this show, or something that could've been ongoing at this time.

This event was also the debut for the firey-red head DAWN MAE, under the ring name BELLA DAWNA. This show also featured another debut, although we thing this may have been her first and last event with GLOOW, in DOLLY DELAVALE.

Now here's a quick listing of matches and happenings from this event:

-TAI WEED is introduced as the referee and hits her version of a sexy ref dance. Tai the cute blonde filled in well for the absent GINGER and ICES.

-BRITTNEY "THE SCHOOL GIRL" pranced her way to and in-the-ring as the announced "Round Card Girl". Brittney is looking very sexy in her plaid mini skirt, white blouse, wearing white stockings, and heels.

-TAI is back for a ref dance

-BRITTNEY is back for some more prancing. Seems things are heating up between Brittney and Tai that looks to be boiling over into some kind of confrontation.

-ELLE MAE w/JEANIE & SAMMY DAVIS MAE take on G.I. HO, as this match seems to be a NO DQ match as the girls fought in and out of the ring, as well as around the bar at Casey's, using object, people sitting at the bar and tables, as well as the walls of the venue to punish the other. This match also features GI HO trying to make an outside the ring dive onto Jeanie & Elle, but GI's big boots got tangled in the ropes, sending her crashing hard to the floor.

-BRITTNEY THE SCHOOL GIRL and TAI WEED get into an argument, which leads to some hair pulling and catfight outside of the ring area. The SOUND GUY smartly sets up a match for these to blondies for OIL WRESTLING!

Production: This is a produced one camera shot show. Lighting is dark, but watchable. Camera work is not good. There is no play by play announcer, other than coming from MC at each event. Videos have been edited to make viewing a bit more pleasurable, as much as we could. We also added in some text commentary of our own, voicing our displeasure for the cameraman....