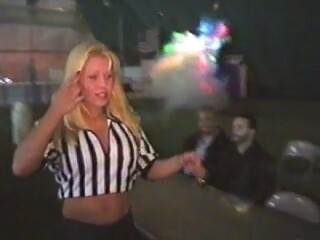 The Gorgeous Ladies of Oil Wrestling aka GLOOW take a ride up the turnpike to Staten Island, NY for their show, BRAWLING BABES: FALL FLING tour at SPORTSFEST.

This bubble dome building is mainly used for indoor soccer and hockey events, but tonight plays hosts to our gorgeous girls of G.L.O.O.W. The video opens with 44DD DEVON FOXX complaining, before walking off. The big titted Devon is 6'1 in her black, spiked high heels. She is covered by a velvet cocktails dress, that barely holds her breasts in.

The lighting for the show is acceptable, we've seen much worse in the early days of the company. The camera work... is well... horrible as the "cameraman" aka "ring crew" guy must have done a drugs as he continually circled the ring like a caged animal. I mean there's been worse camera work in the early days, but this is right under it. We will call his work on this outing, a "360" view of the action.

VANITY aka BABYDOLL makes her way to the ring, and is being introduced as having the "Best Ass in Philly". Hmmmm we will see about that. Both girls strip down to their wrestling gear, aka bra's and thongs. Vanity ass is special for sure.

The girls make their way into the audience as they say hi to the guys and collect some tips too. Both girls get auctioned off, as they both need a manager to spray them down before the match, and in between rings. It looks like the spray is water-based, or water, as the ring doesn't have the blue tarp, but the traditional wrestling tarp. Both girls "entertain" their manager. Devon definitely wins that part of the contest.

LAUREN, a male from the ring crew, is dressed as a referee. Where's the girls at?

While things look like they are getting underway in the ring, music hits, and we are introduced to the very attractive "BAD ASS" BRANDY! Brandy is a gorgeous blonde, with a killer body.

Lauren grabs the mix and yells at Brandy, as the two have a confrontation in the ring, where Brandy ends up getting the best of him with a low blow, and then sends him flying over the top rope as he lands hard on the turf flooring.

Lauren checks the girls for illegal objects as match 1 is underway.

Post match, THE SOUND GUY helps VANITY out of the ring, but DEVON FOXX shoves him. He's in the corner backing down from her. Devon attacks and connects with a low blow nut shot, that buckles him over to the mat. The Sound Guy manages to get back to his feet, and surprises Devon as he puts her up in the rack, where she is screaming out in pain. As he goes to put her down, she hits a DDT and lays him out.

Next up we are treated to the entrance of the "HEAVENLY" ANGEL. Angel is a beautiful blonde from the West Coast, with a gorgeous tanned body.

GORGEOUS GINGER, a G.L.O.O.W. referee comes dancing to the ring. The fans fall in love with her. Ginger hits the ring and dances a little. She grabs the mic and starts talking trash on ANGEL. Ginger challenges Angel to a fight.

Both girls hit the crowd and are out collecting tips. Brandy is re-introduced as the ref for this contest. We see lots of video shots of the girls in the crowd, interacting with the fans at tonight's show.

Both girls get auctioned off for a manager. They dance for their respective managers, then are sprayed down before they lock up.

LAUREN, from the ring crew, returns to the ring to confront BRANDY. This time Lauren gets the upper hand and rips off Brandy's ref shirt. Brandy retreats to the locker room.

"HEAVENLY" ANGEL vs "GORGEOUS" GINGER w/LAUREN as the referee.

During the match Angel confronts Lauren to which he hits her with a DDT, and makes a fast count for Ginger to score the win. Angel then regains her senses and retaliates against him for payback.

NEXT, SANDY BEACHES makes her way through the audience to the ring. SANDY is the female version of ECW's SANDMAN. She's much easier on the eyes, and anyone would almost love to be caned by her. She comes to the ring with her cane, beer, and smoking a cigarette.

DEVON FOXX comes out bitching about SANDY BEACHES, and sets the match for the two to face each other in the MAIN EVENT.

SANDY BEACHES vs DEVON FOXX w/LAUREN as the ref.

This match is in and out of the ring. Out of the ring Devon throws Sandy onto a table in the front, as the fans eat this action up. We see dueling chairs, as both girls tries to get the better of the other. Back in the ring Devon goes for Sandy's cane, but Sandy wisely uses it to brace Devon, and sweep her legs to score the pin.

At the end of the bout, Brandy returns to the ring with Angel, and Vanity, as the girls deliver their revenge to Lauren, as the fans approve.

Productions Notes: This is a one camera shoot, with no play by play announcer.