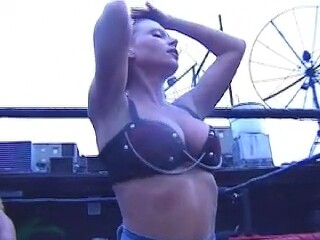 THIS VIDEO IS NOW AVAILABLE FOR INSTANT DOWNLOADING

Must be 18+ and older to view, and purchase this instant video download

This video includes topless nudity, thongs, wrestling, extreme style stunts, scantily clad women, sexual undertones, foul language, and a stinkface! If these things interest you, then you MUST purchase and download this video IMMEDIATELY! You will LOVE THIS SHOW!

This event was held on a Saturday, outdoors, during the afternoon. This was a rarity to see the girls perform during the daytime and outside!

In the oil portion part of the show, the girls get out-of-hand and are all wound up as they all get completely topless! They had so much pent up sexual aggression, that they took it out on the referee from the audience (a man), and then the owner of T's even got it. "WHITE TRASH" BUNNY BUSH, G.I. HO, and TAI WEED all lost their tops, as they "wrestled" in oil.

The wrestling main event saw LADY STORM w/COMMISSIONER SMOKE take on G.I. HO in a "Beach Fight"?! Originally advertised as a street fight, these girls used the deck and sand bar a T's to fight it out. The match saw some great in and out of the ring action, as well as weapons, a huge jump as GI HO launched herself from T's roof onto LADY STORM and SMOKE. And it even finished with ELLE MAE making an in ring appearance to give one of her patented STINKFACES!

Read along for more details about this OUTRAGEOUS live event...

-COMMISSIONER SMOKE in and out of ring promo. Smoke throws a drink on a fan.

Resolution: 320x240
File Size: 416mb
File Type: .m4v / .mp4
Production Notes: One camera, with graphics, no announcers besides what's happening in the ring.
Save this product for later
Display prices in: USD